New Delhi: The Indian Air Force is all set to further boost its fleet of top-of-the-line Sukhoi-30MKI fighters with additional orders for 42 'Super-30' variants such aircraft. Reports suggest that the Cabinet Committee on Security may have sanctioned this fresh purchase sometime early this month. 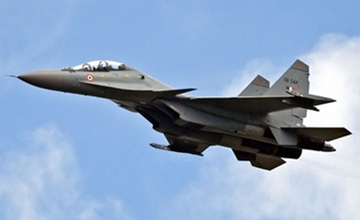 The order is expected to be for the 'Super' variant of the Su-30MKI, which would be capable of carrying the BrahMos cruise missile. The Super variants are also expected to carry the under-development, nuclear-capable, Nirbhay cruise missile with a range of 1,000 km.

The 'Super' variants are expected to field new radars, onboard computers, electronic warfare systems as well as the supersonic BrahMos and the high sub-sonic, strategic Nirbhay missile.

The first two prototypes of the 'Super-30' upgrade are expected to be delivered to the Indian Air Force in 2012, after which the same upgrades will be performed on the last batch consisting of 40 production aircraft.

The fresh order for 42 such aircraft would take the total number of these fighters in the Indian Air Force inventory to 272, making it the single largest type of fighters with the IAF when all deliveries are finally completed by 2018.

The Su-30MKI is the most advanced model amongst the various variants of the Su-30 platform, which includes the Su-30MKK flown by the Chinese air force and a few other nations around the world.