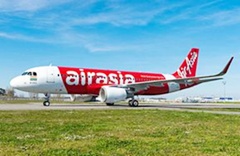 The government today cleared Malaysian budget carrier AirAsia's proposal to invest around Rs81 crore in a joint venture with the Tata Group and Arun Bhatia of Telestra Tradeplace to start a passenger airline in India.

AirAsia Investment Ltd of Malaysia will invest Rs80.98 crore to set up a joint venture company to undertake the business of operation of scheduled passenger airlines, an official release said today.

The Foreign Investment Promotion Board (FIPB) had already cleared the proposal, the finance ministry said in a statement.

AirAsia has proposed picking up 49-per cent stake (the maximum permissible under the foreign direct investment rules) in the airlines joint venture, in which the other partners Tata Sons and the Arun Bhatia outfit will pick up 30 per cent and 21 per cent, respectively.

To launch a new Indian airline and to obtain a scheduled air operator's permit, the JV would now require approval from aviation regulator Directorate General of Civil Aviation (DGCA).

Once all formalities and clearances are completed, AirAsia would be the first foreign airline to set up a joint venture in the India passenger airline segment under a liberalised FDI policy.

The new airline, to be based in Chennai, will operate flights to other small-town destinations, especially in the South, according to AirAsia Group CEO Tony Fernandes.

Meanwhile, reports quoting aviation minister Ajit Singh said the joint venture partner Tatas have not yet approached the government for approval of the airlines JV.

Ajit Singh also said his ministry has acted fast and would continue to do so once it gets applications from the other two partners as well.

"Any clearance will depend on how fast they give all this information, which will be required by the DGCA (to grant them a flying permit)," the minister said.

The government today approved six foreign direct investment proposal totaling Rs732.77 crore after their clearance by the FIPB on 6 March 2013.