Canadian multinational aerospace and transportation company, Bombardier Inc said yesterday that it would 'pause' its business aircraft Learjet 85 programme due to weak demand for the plane, which has been continuing since the 2008 global financial crisis. 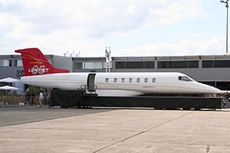 Bombardier will also cut its workforce by around 1,000 at its plants in Queretaro, Mexico and Wichita, US in 2015.  It said in a statement, the company has kept a severance provision of $25 million in the first quarter of 2015.

The pause will result in a pre-tax special charge in the fourth quarter of 2014 of about $1.4 billion primarily related to the impairment of the Learjet 85 development. The company has not indicated when it will resume the production of the aircraft.

Further to the news, shares in Bombardier plunged almost 26 per cent to C$3.07 yesterday in Toronto, registering its biggest fall in five years.

Bombardier's president and chief executive officer Pierre Beaudoin said, "Given the weakness of the market, we made the difficult decision to pause the Learjet 85 programme at this time.''

''We will focus our resources on our two other clean-sheet aircraft programmes under development. CSeries and Global7000/8000 for which we see tremendous market potential,'' Beaudoin added.

Bombardier's Learjet 85 was an ambitious programme launched in 2007 to manufacture a bigger than midsize business jet plane and was its first such aircraft to feature composite materials. The plane was expected to have a high cruise speed of 829 kmph and a range of around 4,800 km incorporating two Pratt & Whitney PW307B engines.

The company has been struggling with the development of new airplanes. The Learjet 85 programme is already behind schedule by a year and the company last year postponed its CSeries jet and axed approximately 3,500 positions.

The company has also revised its previously announced financial guidance for 2014. Earnings before income taxes (EBIT) at both the company's divisions, aerospace and transportation, are now projected to be lower by 1 per cent at 4 per cent and 5 per cent respectively.

These are mainly due to increased provisions for credit and residual value guarantee, pricing pressure on new aircraft and revised escalation assumptions in respect of some transportation contracts, the company said.

Cash flow from operating activities at aerospace division is expected to be $800 million, compared with the previous guidance of between $1.2 billion and $1.6 billion.

Short-term capital resources available as of 31 December 2014 were approximately $3.8 billion, including cash and cash equivalents of about $2.4 billion.

Nevertheless, delivery targets of aircraft jumped 22 per cent to 290 aircraft compared to 238 in 2013.

Montreal-based Bombardier has around 74,000 employees globally and its 2013 revenue was over $18 billion.