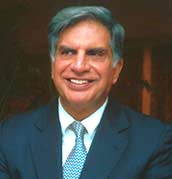 The E-Nano would be built in cooperation with the Norwegian electric car specialist firm Miljoebil Grenland, the Hamburg-based Auto Bild newspaper said.

The Nano, is slated to be released in September this year. The Nano is a no-frills basic car with a 33 hp 623 cc engine. It has no air-conditioning, electric windows or power steering that are standard in modern new cars.

With prices of basic raw material prices having risen, industry analysts have expressed doubts over whether Tata Motors will be able to sell the vehicle at the promised price of Rs1 lakh.

The detail specs of the electric-drive version of the Nano have yet to be disclosed.

Tata Motors has also signed an agreement with Moteur Development International (MDI) of France to develop a car that runs on compressed air, thus making travel very economical and totally pollution free (See: And now, a car that runs on air from the Tata stable and Tata Motors, MDI of France sign technology pact)