Mercedes-Benz has rolled out its one-millionth special smart fortwo electric car to mark its 10th year of production. The anniversary car will be donated to charity, says Mercedes

Ten years ago Merceds-Benz rolled out the smart fortwo, one of the  world's most unusual production vehicles in the market. This week, millionth smart fortwo rolled off the production line at the plant in Hambach, France. The millionth fortwo is a new smart electric drive, which will be donated to charity, says Daimler. 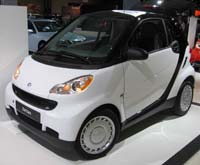 New and excitingly different to conventional cars, the smart city coupé, now called the smart fortwo is a compact two-seater vehicle and measures slightly more than two-and-a-half metres in length.

It was also able to fit into parking spaces perpendicular to the flow of traffic and soon established its own class. Nevertheless, it took two people and their luggage to their destination very comfortably and with maximum safety. It also had impressively low fuel consumption and minimum carbon dioxide emissions.

Even then it anticipated many of today's pressing questions concerning individual mobility and answered them in a unique way. After 10 years of production one thing is certain, the idea has caught on. Thanks to technical innovations and a design that combines functionality with joie de vivre, the smart fortwo has become a cult car.

Initially it was only offered for sale in Germany and eight other European countries. But its popularity spread acroos the globe and today it is available in 37 countries worldwide,  including the US since January 2000. From mid 2009 the smart fortwo will also go on sale in China as the car is practically tailor-made for the growing number of lifestyle-oriented small car customers in a country with numerous megacities.

In China, too, fashion-conscious young people want an agile, trendy vehicle for their flexible urban lifestyles in order to set themselves apart from others. (Also see: Auto China 2008: Daimler to launch the 'Smart fortwo' in China in 2009)