Banglore's  Indian Institute of Science and US researchers have developed a method to make atomically flat gallium that shows promise for nanoscale electronics. 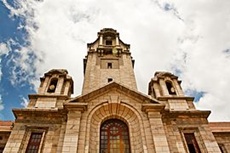 Pulickel Ajayan, Rice University lab of materials scientist and IISc scientists created two-dimensional gallenene, a thin-film of conductive material that is to gallium what graphene is to carbon.

Extracted into a two-dimensional form, the novel material appears to have an affinity for binding with semiconductors like silicon and could make an efficient metal contact in two-dimensional electronic devices, the researchers said.

The new material was introduced in Science Advances.

Gallium is a metal with a low melting point; unlike graphene and many other 2-D structures, it cannot yet be grown with vapour phase deposition methods. Moreover, gallium also has a tendency to oxidise quickly. And, while early samples of graphene were removed from graphite with adhesive tape, the bonds between gallium layers are too strong for such a simple approach.

So Atanu Samanta, a student at the Indian Institute of Science, and the  the Rice team led by co-authors Vidya Kochat, a former postdoctoral researcher at Rice, used heat instead of force.

Rather than a bottom-up approach, the researchers worked their way down from bulk gallium by heating it to 29.7 degrees Celsius (about 85 degrees Fahrenheit), just below the element's melting point. That was enough to drip gallium onto a glass slide. As a drop cooled just a bit, the researchers pressed a flat piece of silicon dioxide on top to lift just a few flat layers of gallenene.

They successfully exfoliated gallenene onto other substrates, including gallium nitride, gallium arsenide, silicone and nickel. That allowed them to confirm that particular gallenene-substrate combinations have different electronic properties and to suggest that these properties can be tuned for applications.

"The current work utilises the weak interfaces of solids and liquids to separate thin 2-D sheets of gallium," said Chandra Sekhar Tiwary, principal investigator on the project he completed at Rice before becoming an assistant professor at the Indian Institute of Technology in Gandhinagar, India. "The same method can be explored for other metals and compounds with low melting points."

Gallenene's plasmonic and other properties are being investigated, according to Ajayan. "Near 2-D metals are difficult to extract, since these are mostly high-strength, nonlayered structures, so gallenene is an exception that could bridge the need for metals in the 2-D world," he said.