The human genome is riddled with endogenous retroviruses — little pieces of degraded and generally harmless retrovirus DNA passed down through the generations, along with our own genetic information. Because most endogenous retroviruses have been part of our DNA for millions of years, scientists can't explain how they went from their virulent, disease-causing forms to the inert bits of "junk DNA" most of them are today. 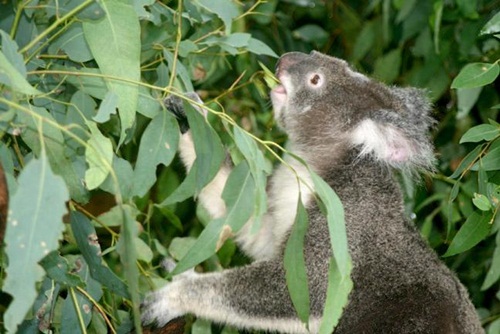 Koalas are fighting off virulent retroviruses with ancient, unrelated retrovirus sequences leftover in DNA. The discovery could explain the origin of some "junk DNA" in humans / Image: Lauren D. Quinn, University of Illinois

A new study published in the journal PNAS looks to koalas for an answer.
"In humans, the youngest known endogenous retrovirus groups are around 5 million years old. That makes it very hard to tell what happened. But the koala is one of the few species known to have an ongoing invasion of the germline by a retrovirus," says Alfred Roca, one of the authors of the study and an associate professor in the Department of Animal Sciences at the University of Illinois.
Like other viruses, retroviruses first attack from the outside. They enter the body, fuse with cells to release their contents, and insert pieces of their DNA into the genetic code of the host, hijacking the host's DNA-replicating machinery to make more copies of themselves.
But if they find their way into sperm and egg cells, retroviral genes can be passed on to the host's offspring, becoming a permanent part of the reproductive genome, also known as the germline.
Early on, new endogenous retroviruses may continue to replicate with disastrous effects for the host. But over time, the sequences stop coding for disease-causing retroviruses and instead become inert "junk DNA." Until now, scientists could only guess at why and how this happened.
"We think the pressure for external viruses is to make lots of copies of themselves and infect more individuals. But once the virus becomes part of the host germline, the pressure is going to be for it to leave the host alone because the host is needed to reproduce the sequence," Roca says. "It has to play nice or otherwise it disappears. The question is how does this process take place?"
Because the koala retrovirus is still relatively young — less than 50,000 years old - and not yet in a fixed location within the koala genome, scientists could monitor its interactions with the koala genome in real time.
Surprisingly, the koala genome is fighting fire with fire.
The researchers found that an ancient and unrelated endogenous retroviral element is inserting itself into the new retrovirus via recombination, deactivating it. Instead of coding for proteins that reassemble into an infectious retrovirus, the recombinant sequence doesn't code for anything.
"We might have found evidence for a molecular defense mechanism of hosts against new retroviral attacks, mediated by more ancient retroviral elements," says Ulrike Löber, researcher at the Leibniz Institute for Zoo and Wildlife Research in Berlin and the study's first author.
Alex Greenwood, also of the Leibniz Institute, led the study. He adds, "The study emphasizes how little we know about the diversity and reservoirs of retroviruses among wildlife. The koala, a species not usually associated with biomedical breakthroughs, is providing key insights into a process that has shaped 8 percent of the human genome, and likely shows us what happened millions of years ago when retroviruses invaded the human germline."
Unfortunately for koalas, complete degradation of the koala retrovirus is likely to take a very, very long time — probably in the hundreds of thousands of years. In the meantime, most koalas, especially in northern Australia, will continue to suffer from retrovirus-linked cancers and immune suppression, leading to secondary diseases like chlamydia.
But while the virus-to-virus battle is being waged, there may be ways scientists can help.
"The complete koala genome has been instrumental in showing that an individual koala can have many — more than a hundred — insertions of koala retrovirus into its genome. This information will enable us to determine which strains are more dangerous and to assist with development of a koala retrovirus vaccine," says study co-author Rebecca Johnson of the Australian Museum, who led a recent effort to sequence the koala genome.
MORE REPORTS