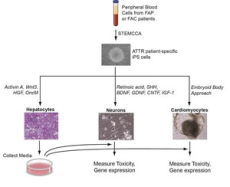 The findings, which are reported in Stem Cell Reports, may lead to new treatments for genetic diseases such as familial amyloidosis.

iPSCs are a form of stem cells that come from skin or blood cells reprogrammed into cells that have the ability to become any type of tissue in the body.

ATTR is a lethal, autosomal dominant protein-folding disorder caused by one of more than 100 distinct mutations in the transthyretin (TTR) gene. In ATTR, protein secreted from the liver aggregates and forms fibrils in target organs, chiefly the heart and peripheral nervous system, highlighting the need for a model capable of duplicating the multisystem complexity of this clinically variable disease.

According to researchers using iPSC technology, cell lines can be established that are genetically identical to the individual from whom they are derived, allowing for disease modeling and development of novel therapeutics in the personalised genetic context of the patient from which they are made.

In this study, the researchers used the iPSC to generate liver cells that secrete the disease-specific mutant protein as well as cardiac and neuronal cells, the downstream target tissues of the disease.

Upon exposure to the mutant protein, the heart and neuronal cells displayed signs of stress and an increased level of cell death as compared to those exposed to normal protein, thereby recreating essential aspects of the disease in vitro.

Furthermore, small molecule stabilizers of the mutant protein that are being tested in clinical trials show efficacy in this model, validating this iPSC-based, patient-specific in vitro system as a platform for testing therapeutic strategies.

''Our work demonstrates that it is possible to model a complex, multisystem genetic disease in a relatively short space of time, using lineage-specified cells derived from patient stem cells,'' explained George J. Murphy, PhD, assistant professor of medicine in the section of Hematology and Oncology and co-director of the Center for Regenerative Medicine (CReM) at BUSM and BMC.

''This is a major breakthrough that will facilitate testing novel targeted therapies that are being developed for ATTR amyloidosis,'' said coauthor John Berk, MD, clinical director of the Amyloidosis Center at BUSM and BMC, where these rare diseases have been studied for more than 50 years. ''Patients and families from all over the world who come to us for treatment may soon benefit from this research.''

Funding for the study was provided by the Amyloidosis Foundation, the Young Family Amyloid Research Fund and the Boston University Clinical and Translational Science Institute.