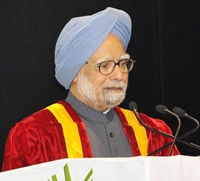 The government proposes to formulate a diversified policy for development of science and technology in the country with participation of industry and the private sector, Prime Minister Manmohan Singh said today.

While the country has the necessary institutions and the infrastructure needed for achieving scientific excellence, he said, what is lacking is the motivation to achieve.

Industry and the private sector could help bring in the necessary climate for scientific and technological excellence, he said, while speaking at the inception ceremony as the general president of the Indian Science Congress Association (ISCA) on its centenary year.

Starting this year, a special scheme for 100 doctoral research fellowships every year will be launched under a public private partnership between ministry of science and technology and the Confederation of Indian Industries.

In the larger interest of promoting scientific culture in the region, it was proposed to introduce a scheme to invite 25 young scientists from neighbouring countries to undertake doctoral research in India. The department of science and technology will work out appropriate arrangements in this regard, he said.

''Over the course of the year, we hope to formulate a new Science and Technology Policy that will update the existing policy document of 2003 in the light of a rapidly changing scientific environment in the country and the world. We have to keep pace with what is happening elsewhere in the scientific world and the evolving aspirations of the Indian people,'' the prime minister said.