Zen and the art of transparent cars

For the concept car zaZen, designed by Swiss design company Rinspeed and Germany''s Bayer MaterialScience, to come down to earth will require auto companies to figure out how to crystallise the innovative ideas, materials and technologies into volume manufacturing. 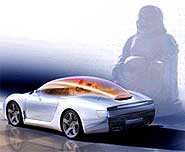 Don''t expect to see these cars on the roads anytime soon. But the idea is fascinating – cars with transparent plastic panels, seats and dashboard displays, handles and knobs.

On 28 February 2006, just such a car will be put on show for the first time at the Geneva Motor Show. Only, it will be ''concept car''. It''s called the "zaZen" (that''s exactly how it''s spelt, lower case, capital and all). The zaZen concept has been created by Rinspeed, the Swiss design company, and Germany''s Bayer MaterialScience, one of the biggest plastics producers in the world.

The companies hope that the new concept car will point the way to "enlightenment for future generations of automobiles". Why "enlightenment"? That''s possibly because one of its features is a conspicuously large third brake light that shines out of what looks like a floating, transparent teardrop roof (see image). The transparent rear window of the concept car turns into a "luminous holographic area", according to Bayer.

Ian Paterson, the member of the Bayer MaterialScience board of management responsible for innovation, believes that "The world premiere of the ''zaZen'', with its holographic brake light and smoothly contoured single-section roof dome made of the high-tech polycarbonate Makrolon, marks the beginning of a new era in lighting technology in vehicle design." Rinspeed''s boss, Frank M. Rinderknecht, sees the innovative light as a path-breaking idea.

A Bayer press release is candid about the future. It says: "In our world, it (the zaZen) will make its first appearance at the end of February at the Geneva Motor Show. After that, who knows? We might see some of these exclusive vehicles actually driving along our roads."