Motorola and the limits of Six Sigma

Motorola may have been the pioneer of the Six Sigma quality programme and twice-winner of the Malcolm Baldrige Award, but did it pay excessive attention to efficiency at the cost of effectiveness, asks Kiron Kasbekar.

Motorola has been one of the few American consumer electronics companies that survived in a world increasingly dominated by East Asian and European companies. Earlier the US had to bow out of the TV and other entertainment electronics markets. Now the main US player in the mobile handset business, Motorola, seems to be on the way out.

It's sad, because Motorola was the pioneer of mobile phones, and more. It was also the pioneer of Six Sigma, and many other companies worldwide learned from it both how to make phones and to improve quality.

The Motorola website proudly talks of "Achieving a world first" when it describes how, on 21 September 1983, the company made history when the US Federal Communications Commission approved its DynaTAC 8000X phone, the world's first commercial portable cell phone. A decade of research and development and an investment of $100 million had resulted in Motorola producing "an innovative portable technology that revolutionised the communications industry and changed the lives of people around the world".

A little less than 25 years from there, and Motorola is ready to concede the game to its rivals - although its management is not saying it in so many words. The company has decided to hive off its troubled mobile devices operations into a separate company (see: Motorola to split into two companies - mobile devices, and broadband and mobility solutions.) 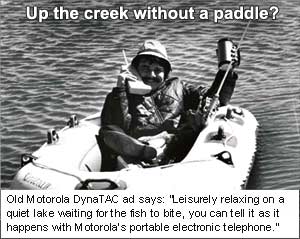 All indications so far are that no major mobile equipment company is interested in acquiring these operations - and these may decay slowly, unless a side player, such as China's Huawei, steps forward.

The purpose of this article is neither to debunk Six Sigma or other quality programmes, nor to imply that Motorola as a whole has ceased to be competitive. The company's quality initiatives give it considerable strength, as do its competencies in technology development and application. The point of this article is that remaining competitive in the world needs much more than these things, as can be seen in the case of the company's mobile devices division.