Weaving science and AI with Mythology

Chennai-based author, Prana Natarajan, debuted with Brain Bank Publishing, which released his two novels Three Halves and #MeToo Brutus. Natrajan loves writing poetry, a habit he had developed in his school years. Having written several poems, which are available on blog and Facebook notes.

Prana has also included a couple of such poems in his book Three Halves.He is known for his simple style of writing and has recently penned his third book, Trinity by the Horns, which is an allegorical retelling of Hindu mythological snippets in the backdrop of space exploration, startups, bots, and boardroom politics. A theatre enthusiast and an amateur playwright, Prana has acted and directed a few skits at school, college and corporate events. He is currently working on converting his novel #MeToo Brutus into a stage play, with the support of professional theatre groups.
In this interview with Swetha Amit, Prana talks about the unique idea of weaving science and mythology, artificial intelligence and the consequences of power. 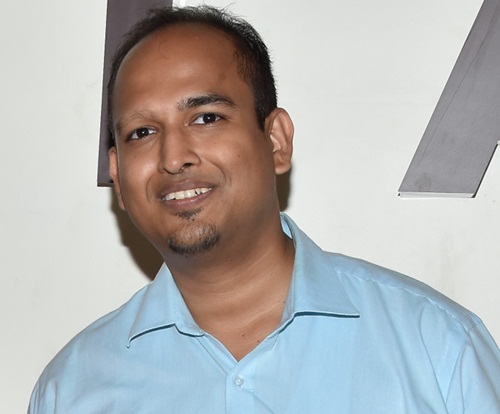 What inspired the  idea of weaving a science fiction novel comprising characters with mythological names?
If you look deep into our mythology, there will always be a bunch of characters who will be in conflict with one another. Another set of characters will cause trouble and then some other character will come to resolve this conflict. This fairly interesting plot can parallels our corporate life where we face similar situations. It’s no different from an Asura doing a penance, seeking a boon, misusing that power and another God coming to solve the disaster.
I thought that this parallel would work in my book and that blending these two worlds will make sense.  At that moment, I had written an outline but was still contemplating on what the organisation could specialise in. I thought why not use something unique like a space exploration mission team in the plot.
Mythology has become a separate section in bookstores and most of them are retelling the same story of the Gods. I wanted to come up with a story where readers are treated to something different.
The characters in your book were eccentric in their own way. Where did you draw inspiration from while chalking out these characters?
I have drawn a lot of inspiration from some real-life characters whom I see in an office set up or a day to day scenario.  For instance, the character of Shivpal is aggressive. However, that aggression is blended with tremendous insecurity as well.
A lot of aggressive people you come across in real life try to mask their insecurity by appearing aggressive. The character of Brammy is also someone who wouldn’t have an original idea even though he is supposed to be the creator. He would just keep nodding to anything anyone said and again you come across  characters like these in the corporate world.
One part of your book subtle brings out the #metoo outpourings, which incidentally is also one of your earlier works. Considering, this is prevalent in the society, how do you think this should be dealt with?
Honestly speaking it’s unfortunate that we don’t have a mechanism to handle this. In fact, if you step back into my earlier book #Metoo Brutus, one of protagonists reports a harassment case to the human resources executive, to which the executive responds saying that the guy who harassed her has been around for 15 years and what she was alleging was unbelievable.
We had a government entity to take care of such harassment cases but I recently heard that it’s been dissolved. We need such entities to address such issues. We need to enforce the idea of a safe place for women to go to. As it is, they find it tough to commute without being groped or sometimes get stalked. I think women should stand up to such things and report such cases. A lot of them don’t report such cases due to the stigma attached to it.  Women should stand by other women and also men should stand by such women.
I know of this 13-year-old girl whose neighbour was trying to molest her. She grabbed a brick and hit him. I was amazed by her will power to defend herself and that I feel every woman should possess-the drive to defend yourself no matter what.
4.    Some of the Asura tributes mentioned in your book comprises of need for power. While power can be seen as positive, it also tends to bring out the negativity in a person. How does one balance this aspect and prevent misusing power?
The thing about power is that we all have it in some manner. When it comes to how and when we use it, we are very prudent and exercise discretion. If we reach a point where discretion is to be overshadowed by the magnitude of power that we have and not bother about the after effects, that’s when the misuse of power starts.
Coming to the Devas and Asuras, Devas have realized that if something is destined to be with them, it cannot be taken away by force. Asuras on the other hand are always after resources.
Misusage of power can be prevented if we prioritise our needs and wants. We should ultimately ensure that our core principles should overshadow our needs and wants. 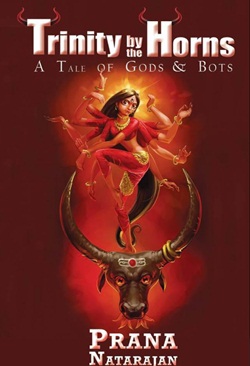 Your book is an interesting blend of the startup world, characters with mythological references and science fiction. While penning down this novel, did you ever fear that these three aspects could overlap one another and in turn mar the plot?
Yes. There was this fear of digressing too much. That is why I let go of the mythology theme midway. If I had stuck to mythology, I couldn’t have depicted the character of Shivpal the way I have in the book.
Also with regards to the character of Balaji, I initially thought of creating an instance where he goes on a 4-month vacation which is similar to Chaturmaaswhen Lord Vishnu goes to sleep for 4 months. However, it doesn’t seem practical as in reality no one goes on a 4-month vacation especially in a startup.
So, I decided to mainly stick to the themes of Science fiction and start up. The mythological flavor will continue as long as the names of the characters are derived from this genre.
Your book also deals with the concept of robots and Artificial Intelligence(AI)-a phenomenon that is being discussed largely in the world. Do you see this as a bane or a boon to mankind?
I was in a research company called Frost and Sullivan, four - five years back, where I was tracking markets for driver-less cars. For driver-less cars, one of the main things that would eventfully come to be the most instrumental would be Artificial Intelligence (AI). AI is just an extension of algorithm.
With regards to AI being a boon or bane, that’s where the Asura and Deva aspect comes in. If AI follows the path of the Devas , the machine will just listen to what you are saying. However, if AI goes the Asura way, it could end up like the Terminator movie franchise where the machine will end up overpowering you. Both paths are possible so it’s tough to estimate if AI will be a bane or boon. In my opinion AI should be the boon if all goes well.
Your book also deals with the theme of leadership. What according to you makes a good leader?
I strongly held on to one phrase that I came across sometime back. It says, ‘You must lift as you climb.’
If you want to grow in an organization, you should ensure that your subordinates are also able to grow. For me a good leader is one who can ensure and create the growth path for the entire hierarchy. This involves not just promotion or career progression but the overall skill development as well.
After this book, do you have any other off-beat themes in the pipeline?
I do one story in mind. However, I am still fighting the writer’s block to put it down.  At present, I want to ensure that my three books reach the audience. I will be working on my new story sometime in the new year.
MORE REPORTS