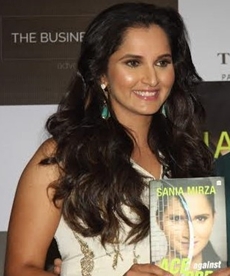 Currently ranked World No 1 in women's doubles, Sania Mirza became an overnight sensation when she won the Wimbledon Girls' Doubles title at the age of 16.  From 2003 until her retirement from the single's circuit in 2012, she was ranked as India's top player by the World Tennis Association. A six-time grand slam champion, her partnership with her doubles partner, Martina Hingis, saw her through 41 one consecutive wins between August 2015 and February 2016.

Mirza is an the recipient of Padma Bhushan, Padma Shri, Bharat Kel Ratna award, Arjuna Award for Lawn Tennis and the CNN-IBN Indian Of The Year in sports.

In this interview with Swetha Amit, she talks about her autobiography Ace against Odds, which is her story about her trials and tribulations both on and off the court, her battles against those odds, which saw the emergence of a tennis ace, making India proud of her achievements.

Ace against Odds is an autobiographical account of your rather tumultuous, yet inspiring journey. How and when did the idea for this book come?
Well there were a few things which inspired the book. Firstly, I have had a career starting from the age of 16 when I turned into a professional tennis player. It's been a long road from then till now, which has seen me through a lot of entertainment on and off court. Taking all this into consideration I felt I had enough substance to pen down a book.

Secondly, my main goal was to achieve the number one status which I did. Post that, I felt I owed it to everyone including my family and fans to tell the story about my entire journey.  It was a process that started six - seven years ago and not something that happened overnight. I knew I wanted to share my story at some point and that's how Ace against odds eventually came about.

Did you ever feel hesitant about disclosing any particular phase / chapter of your life in your book?
I did. You see I am a very private person by nature. Though I do have my regular outings with friends, you would rarely find me showcasing my emotions easily.  For instance it was tough to pen down about aspects like my marriage and dating Shoaib (Cricketer Shoaib Malik) as that was something very personal to me. There was also this phase where I was depressed because of my injuries, which not many people know about, or also those tough times I went through while battling those several controversies. However I have tried to be as open and honest as I could. Now when I look back, I am glad I did as I feel a lot better sharing those thoughts with my fans.

You did very well in school and at one point even aspired to be a doctor. Yet you also had a relentless passion for tennis. So how did you eventually choose tennis over medicine as your professional career?
I had been playing tennis from the age of six and at the same time I was quite good in my academics where I would score 90 per cent in my classes. However, the turning point for me came when I was 12 years old.   My headmistress compelled me to play a tournament, which I was reluctant to participate in initially, for fear of missing my attendance. I won the under-14s and under-16s nationals, something which was extraordinary. I also got my first sponsorship from Adidas at that time, and I am still with them even today.

This was a turning point for me to understand and consider the fact that I was actually good at it. Being a competitive person that I am, I love performing to the best of my abilities and winning. Tennis helped me fulfil these aspects of my personality.  That's when I realised I wanted to become a professional tennis player.

Most of my cousins who saw me come back from the courts would remark saying how lucky I was to get to play while they would be slogging over their books. However I would tell them that tennis involved a lot of hard work as well.

You encountered success and fame right from your teens. How did you manage to handle this adulation and constant scrutiny at a tender age?
I used to struggle initially. People don't realise how difficult it is to become famous while you are still a teenager. You are chubby, battling acne woes and trying to find your identity.  Amidst all this, when you are asked several questions by strangers, it is confusing and overwhelming at the same time. You are bewildered as to why you are constantly being questioned or judged. Today at 29, it's easier for me to deal with it as I am confident about who I am and a lot more secure about myself than I was when I was an adolescent. 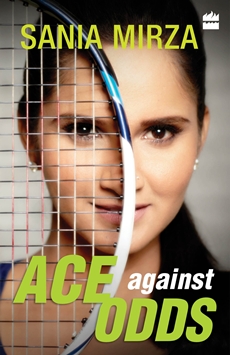 Losing is a part and parcel of any sport. How did you deal with some of those painful losses and what would you say is your strength as a person?
After every loss, I would remind myself about my love and passion for the game, which is what keeps me going. Tennis has taught me one thing - in life we all go through ups and downs, but there will always be a next day as long as you want to start afresh.

My strength is that I go with my heart irrespective of the consequences. If I think something is right, I abide by it and by doing that I know I can sleep peacefully with a clear conscience. That has worked for me 95 per cent of the time. However 5 per cent of the time, it backfires as there are not too many people who go with their heart but go with their head instead.

Your partnership with Martina Hingis has seen a series of successive wins, taking the world by storm. What would you say makes your partnership tick?
Well, the reason for our successful partnership traces back to the good camaraderie we share, both on and off court. It helps that we are good friends and that we understand each other's games and strengths well. My strong forehand and returns complements her strong backhand and volleys. Most importantly we really enjoy playing together as a team.

Speaking of partnership, could you tell us more about Prarthana Thombare who would be your partner at the Rio Olympics 2016?
I think Prarthana is quite strong and promising. We have been practising together regularly and I hope it helps her. I am sure she is quite nervous about playing in the Olympics at the age of 22, but that's quite normal.  I think it will be a great experience for her, playing at the Rio Olympics 2016 and I am positive that she will do well..

I am quite happy to guide her as I have always said ''Why be the next Sania? Why not be somebody better than Sania?'' So I just hope someone from India comes out and shines there. While I say this, I am also not planning on retiring any time now and will continue playing as long as I can.

Women who play sports today are often told that being out in the sun too long results in their complexions getting tanned. What is your take on this?
Well I think every girl goes through that period where someone says that ''you are getting too dark'' or "savli hai'' (wheatish complexion). In fact, I used to often hear people say things like, ''that girl is good looking, but too dark''. I think those who haven't got to hear this are lucky. Frankly speaking, I find this whole approach towards dusky skin pretty absurd.

You have also set up the Sania Mirza Tennis academy to nurture budding tennis talent in our country. Being a successful Indian woman tennis player, what would you advise aspiring players in our country?
Whether it's for women or players in general, I would always tell them to love what they do. Even if it's choosing something out of the box, they have to believe in themselves even if nobody else does as that's the only way to go forward. However, if they start doubting their abilities for even a minute, thinking they are not good enough, then they will lose that fervour to prove themselves. Therefore, I would strongly advise aspiring players to believe in themselves.

Lastly, having authored an autobiography, have you personally read any autobiographies of other sportsperson that have influenced or inspired you?
Well yes. I did read legendary tennis player Andre Agassi's autobiography titled Open.I also managed to read Undisputed truth, Mike Tyson's autobiography, which I thought was amazing, considering the odds he overcame to become the world's greatest champion.