That "on top of the world" feeling

Arunima Sinha, is the first woman amputee to climb Mount Everest. She is currently setting up a free sports academy for the poor and differently- abled. Sinha, a former national volleyball and football player, boarded the Padmavat Express train at Lucknow for Delhi on 11 April 2011, to take an examination to join the CISF. She was pushed out of a general coach of the train by thieves wanting to snatch her bag and gold chain and lost both her legs in the process. 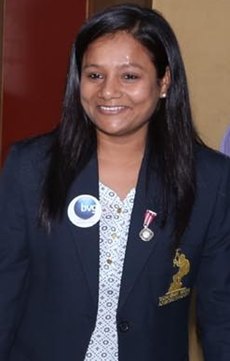 Inspired by cricketer Yuvraj Singh, who had successfully battled cancer, "to do something" with her life, she trained and excelled in the basic mountaineering course from the Nehru Institute of Mountaineering, Uttarkashi. She telephoned Bachendri Pal, the first Indian woman to climb Mount Everest, in 2011 and signed up for training under her at the Uttarkashi camp of the Tata Steel Adventure Foundation (TSAF) 2012.

Under the guidance of Bachendri Pal, she started her ascent of Mount Everest. After toiling up for 17 hours, Sinha reached the summit of Mount Everest at 10:55 am on 21 May 2013, as a part of the Tata Group-sponsored Eco Everest Expedition, becoming the first woman amputee to scale Everest, a feat that won her praise from then sports minister Jitendra Singh, and an award from Uttar Pradesh chief minister Akhilesh Yadav. She was awarded the Padma Shri , the fourth highest civillian award of India, in 2015.

In this interview with Swetha Amit, Sinha talks about her Everest expedition and plans to set up a sports academy for the differently abled.

Born Again on The Mountain is a title that spells grit and determination. How did you initially come up with the idea of writing this book?
The idea occurred to me while I lay on my hospital bed, recovering from the injuries and wounds inflicted on me by the asault on the train. I wanted to document each moment of my journey. Initially I wrote it in Hindi as I am not as proficient in English. Later, Hindustan Times journalist Manish Chandra Pandey helped me translate it into English.

Born Again on The Mountain is available in Hindi as well as in Marathi. On 27  November 2015, the Hindi edition of the book was launched by Uttar Pradesh chief minister Akhilesh Yadav and Ratan Tata.

That horrific incident on the train, changed the course of your life. Such tragedy can either make or break a person. What was your source of strength during that phase?
My weakest point was  the amputation of both my legs, which left me shattered. However, I decided to convert this weakness into my biggest strength, which I managed to do. As a saying goes, 'when one door of happiness shuts, another opens.' I believe that when God takes a part of your body for good, he blesses you with another. If one door closed for me, I made sure that I opened nine other doors.

You had initially received a lot of support and coverage from the media. Later, the same media who stood by you branded you as an opportunist and questioned the credibility of your story of your accident.  How did you handle this sudden shift in attitude?
Actually I do not blame the media. They said whatever they had to say. If you consider an ECG, a straight line indicates you are no more. However, if it goes up and down, it means that you are alive. I consider such instances as the ups and downs in my life which means that I am alive. Considering how I almost lost my life, I regarded this a blessing.

What inspired you to scale Mt Everest?
I decided to take up this challenge from my hospital bed. An article in a newspaper triggered this inspiration. I immediately asked my bhaisaab (brother-in-law) if I could actually scale mountains. He responded in the affirmative saying that if you have the passion, grit and determination, you can reach great heights.

When you initially took up the challenge to scale Mt Everest, how did you handle the cynical reactions of people around you? Some of them had even termed you insane?
If you look at history, whoever society has mocked at, are the ones who have been successful.  As Mahatma Gandhi has quoted, 'First they ignore you, then they laugh at you, then they fight you, then you win.' So I made sure I focused on my goal, worked towards it gradually and when I actually accomplished this mission, the same people who called me crazy were the first ones to applaud and shower praises upon me.

At the Hillary step, which is cited to be one of the most difficult stretches of Mt. Everest, you were losing energy, hope and support. Even one of the leaders refused your request for support. What kept you going even at this stage when the odds were stacked against you?
This particular juncture was the most painful part as I was bleeding considerably. However, I went with a mind-set of wanting to instill pride among people. There were two choices that lay ahead of me. To turn back and go and lead an ordinary life. Or, scale Mt. Everest - the ultimate destination that would make the whole world proud of me. I chose the latter to channel all my energies into making it to the top.

It is said that nature offers some vital lessons to mankind. What did you learn from this entire expedition of being in the midst of powerful forces of nature?
From nature, I learnt how to achieve my goal and also remain humble after that. In mountaineering I realized that you cannot conquer mountains with your head raised high. With every step you take as you climb higher, you tend to bend your head down. Nature offers great lessons in humility.

After your horrific ordeal, do you think the government has managed to implement better safety measures for women in trains?
Well there is a lot that can actually be done for the safety of women. However, I don't want to blame anyone as it's not practical to put up security measures behind each and every woman. So I will just say that each girl should be made stronger in order to combat such untoward incidents. My sincere request to both the central and state governments is that they should make self-defence and martial arts mandatory for all women in schools. Had I trained in karate, perhaps I wouldn't have lost my legs today.

You had plans to set up a free sports academy for the poor and differently-abled persons. How has the support and response been so far?
It has been good so far. I have now taken up land, so I can say that the sprouts have grown from the idea that was seeded in my head sometime back. I have 100 per cent confidence that it will materialise and grow further. I can forsee players like Sania Mirza and Mary Kom emerging from this sports academy.

What are your future plans?
Out of seven continents, I have scaled peaks in four continents already and I hope to do the remaining three successfully. In fact I am leaving to South America in January. Then I will head to Antarctica and then to North America. It is my personal dream to do a mission-seven summit [scaling the seven highest peaks in the seven continents]. My other dream, is to make this sports academy a success.