Christopher Doyle is the author of 21 books - The Mahabharata Secret and The Mahabharata Quest. He is known to transport readers into an interesting world of codes, ancient secrets, and historical evidence with an element of mystery.  After having graduated in Business Management from IIM Calcutta and before embarking on an entrepreneurial journey as a strategic consultant, he worked with leading  Coats Viyella, Hilton Hotels, IBM, and The Economist Group in  senior executive positions including CEO. 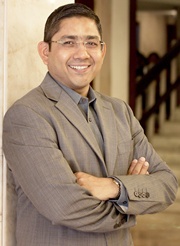 An avid musician, who lives his passion for music through his band – Mid Life Crisis – which plays classic rock, Doyle has also written articles on management and business for Indian and international publications and is also regularly to speak at international conventions and conferences. In this interview, with Swetha Amit he talks about his latest book The Mahabharata Quest, the inspiration behind it, a bit about subjects like history and mythology, and his future plans.

Both your books The Mahabharata Secret and The Mahabharata Quest are an interesting blend of history, mythology, science and mystery. How did you come up with such a dynamic concept?
It started off with a phase of books that I had read in the '90s and early 2000s. One of the books written by Akshoy Majumdar titled Hindu History caught my fancy.  This book contained a recorded History of India during the pre-historic times, scriptures of Vedas, Puranas and and Mahabharata.

Interestingly, this book talks about Hindu Gods having been humans and talks about Shiva as a general of the Devas who helped them defeat the Asuras which eventually earned him the title of Rudra the destroyer.

In the meantime, I was reading other books by Western authors on Mythology and cultures around the world. One of the books by Graham Hancock called Fingerprints of the Gods came up with the idea that there was an ancient civilization which had advanced science and technology. The other interesting book I read was called Urial's Machine by Christopher Knight and Robert Lomas, which basically tried to explain the background of a lot of the sites in the UK using science. It actually tried to prove that scientific monuments which were built for astronomical purposes were highly accurate in predicting the movements of constellations and stars.

Reading all this really intrigued me as these were all people who were trying to interpret mythology using science. Based on what Akshoy Majumdar said, a thought struck me about the possibility of the existence of an alternate history which was not recorded and that which we were not aware of. You see, the Mahabharata itself says that it is itihaas (history), which means that this was actually what happened.

So the Mahabharata itself is not just an epic story or epic poem, it is a historical record of events that occurred many years ago. And if the Mahabharata was true, then it was possible that some of the fantastic events described in the Mahabharata could have a scientific base as well, which no one has explored as of now.  This fascinating thought lingered in my mind and propelled me to explore this aspect further. So that's really how history, mythology and science came together.

What prompted the idea of linking both your books to the classical epic of The Mahabharata?
It was honestly a story written for my daughter. In 2006 when she was 7 years old, she had outgrown all the fantasy stories I used to tell her. So she was basically looking for something new. She had a very keen interest in mythology and history. So I started looking for something that would be a basis for the story I would create for her. When I started doing that research, in 2006 I came across the legend of Asoka the great. While I was reading about that legend, things started to fall into place. Suddenly the ideas which I had earlier mentioned, sort of began to develop.

Historically Asoka the great was known to have suppressed science during his rule which is why the brotherhood legend came about. He used the brotherhood to hide all the scientific advances. It was first written down sometime between 200 BC and 500 BC.  This sort of coincided with the time when Mahabharata occurred. So the thought came to me that there could be something in the Mahabharata that was really scientific and also dangerous which he decided to hide.

So that's how I came up with this concept of the science in the Mahabharata and used the connection between Asoka and the great epic. The story got written across 2 years and by the end of it, it was a book. That's how 'The Mahabharata
Secret' was born.

Considering books authored by Dan Brown, Ashwin Sanghi and Amish Tripathi, which fall under the similar genre, what makes your books different and stand out from the rest?
The one thing which is common amongst the three of them is the fact that they use religion as a base. While Dan Brown has used Jesus Christ as his base, Ashwin and Amish have used Krishna and Shiva in their respective books.  My books on the other hand have no religious context or content.

The second thing that is common at least between Dan Brown and Ashwin is that they generally base their stories on established conspiracy theories. I think they do a very good job of weaving a story out of it. On the other hand Amish's books belong to a modern mythical fantasy genre, where he has created a story about a particular God. My books are neither mythical nor do they revolve around established conspiracy theories.

The third thing is that unlike all these three authors, I use science in my books. For instance in the Mahabharata secret I didn't want that secret weapon that could destroy the world, mentioned in the book, to be a vastra or a nuclear weapon as it would be very clichéd. So I used a totally different scientific concept which I had to build from scratch. The use of hard core science and accepted scientific fact to explain mythology was something that makes my books different from these three authors.

The Mahabharata Quest talks about a strong linkage of Alexander the great to India. Could you elaborate more on this? 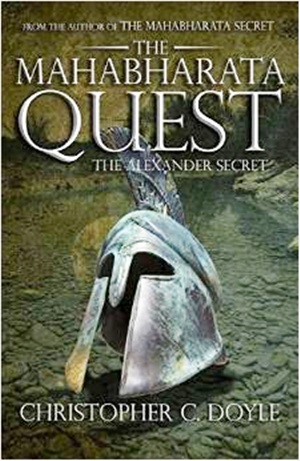 I could not accept the traditional explanation that his soldiers revolted at the banks of the Beas River saying they wanted to go back. In fact, the first time the soldiers wanted to go back home was after conquering Persia and that's where Alexander first told them they were going eastwards, towards the ends of the earth. As per the Greek tradition, it was believed that beyond the Indus River lay the great ocean which circled the entire landmark of the earth. So if you march far enough to the east, you come to the ocean. However when he stood at the banks of the Beas, he saw the Gangetic plains lying ahead of him and realised that he had not come anywhere close to the sea.

For a man who had marched 20,000 miles in the quest of conquering the world would have ideally liked to conquer this territory as well. Instead he turned back mysteriously. So for me I saw this as a big gap and this is where I found the linkage in my book between the secret of the gods and Alexander's real purpose for visiting India

Some portions of the book mentions about Greek Gods being similar to Hindu Gods. In that case, do you see any similarities between Greek and Indian Mythology?
There is definitely a lot of similarity. In the book, more than comparing the gods, I have actually compared Shiva's trident to Poseidon's trident. Poseidon was the God of Water so he would correspond more to Varuna in Indian mythology. If you look at Zeus, the God of thunder and lightning, Indra would correspond with the same. So if you look at it this way, there exists a lot of similarity between Greek and Hindu Gods.

There is a chapter which talks about how Alexander let ambition get the better of him and ended up breaching two important Macedonian rules. Do you see a similar sort of stature in the modern world where people let ambitions and money get the better of them?
I do.  In fact, Alexander was a very different person when he started out and different when he died. It's a very interesting transition of a young man who has achieved so much success that he gets arrogant, ambitious and eventually begins to break the rules over time. We see something similar happening to people who taste success very early in life.

For instance if we look at people who become stars at the age of 18 or 19, they start throwing tantrums and become belligerent. This is exactly what happened to Alexander. He was 19 years old when he became the king and 25 when he defeated the Persians.  That kind of success can go to your head. What I showcased in my book was how his arrogance actually cost him his life.

I also think that when you taste success very early in life, you begin to think you can evade failure. This leads to arrogance as you start viewing yourself as someone who is invincible. So I feel failure is a very important teacher in life. Also the ability to handle success is a matter of experience and maturity.

Both your books emphasise on the importance of Archaeology. In today's world, how do you see the interest of the people towards this field, its prospects and future?
I think archaeology is very important as it enables us to understand our past and derive explanations behind some mysteries. One can also learn several lessons from our past and it's useful in validating certain theories. For instance we can theorise about Alexander the Great. However archaeological evidence is what will help in validating this theory and will enable it to become a fact.

India has a rich past and heritage so I personally see a lot of scope for archaeology. There is great potential and a lot of work can be done in India from an archaeological perspective. Unfortunately the state of archaeology in our country is not where it should be. It will be great to see many young people getting into archaeology and exploring India's past.

The book has ended in a manner which has left readers with anticipation.  When will your next book be out?
The next book should be out say, sometime after September 2015. I wish it could be faster. But I like to do a thorough research before writing my books. This takes a lot of time as I am procuring books, reading them, finding the right link I am looking for and the right basis for theories. And I need to read several books and articles before I even start coming up with a theory. I want to maintain the quality of research that I do and also maintain my credibility.  After having raised readers' expectations, I wouldn't want to let them down.