Start up Diaries: the mind of the entrepreneur

Gagan Jain is a media, retail and ecommerce entrepreneur; and co-founder of Rangrage.in. He recently co-authored The Start up Diaries along with his wife Neeti Jain, in which they chart the journey of six young entrepreneurs. In this interview with Swetha Amit, he talks about his book and more

How did the idea of writing 'Start up Diaries' come about?
It happened when I was on a vacation. I proposed starting an e-commerce company to my brother. There was instant refusal in his response. He said he wanted to stick to trading. 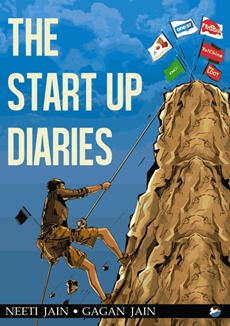 When I thought about his response I came to the conclusion that maybe there was a lot of hype about entrepreneurs being super humans and visionaries. So the first reaction that comes to one's mind is that I can't be superhuman.

There are two ways to counter this. One is by shouting saying entrepreneurs are not super humans. Second is to write a book which would appeal to the audience in a very casual way and write it like a story with regards to strategy in organisations. We wanted to bring in small points which constitute strategy and slowly that's how the ideas for the book came about.

What is the mind-set that creates an entrepreneur?
I would say that they have no specific mind-set. In fact they are like any of us who commit mistakes and learn from them, which is also what the book addresses.

However one quality which sets them apart is that they are initiators and are not afraid to take the first step when they want to achieve something in life.

There's a line which I have heard a lot of times in my life which is: zyada udd mat, gir jaayega (don't fly too high as you will fall) which is true.

If you try to fly, there is a probability of falling down. Though the analysis is right here, the conclusion is wrong. We shouldn't stop based solely on the conclusion.

So the ideal way to think is that it's fine if we fall down, but we should be ready to stand up, take another step and not take failures personally. This is one quality which I feel not only an entrepreneur but every person from different fields should possess.

Right now entrepreneurship is like a fashion trend. A lot of people are getting into it as they see newspapers covering entrepreneurs. Though this coolness is a big factor, it's a wrong premise.

There are others who take it up as they see a lot of scope in this country. In general, the economy has become more open to risk takers. One also sees a change in the mind-set over the years.

Today for instance, girls are willing to marry a struggling entrepreneur which was not there earlier. There is also the presence of the internet which serves as an information platform. So things are moving at a faster pace and people are taking to it a lot more.

Failure is a serious possibility in such a high risk venture. How do entrepreneurs approach such setbacks?
Entrepreneurs just do not realise that there's a possibility of failure. The ones who I met while writing this book didn't show any signs of a realisation about setbacks.

Like any one else, they tend to think whatever they do is the best. When they started the business, they thought this was the best way to do something. In fact they do not face failure on day 1 or day 2 or even for the next few months whiloe their energies are channelised into setting up this business.

Once they start getting negative reactions, that's when reality strikes and then maybe they get the feeling that they are failing.

But by that time, they have already invested so much money, time and effort into the venture that they cannot come out of it just like that. So they keep moving ahead. If entrepreneurs realise that failure is a probability, they will probably never start a business.

During turbulent times, one often ends up as a lone fighter. With lack of support from partners, friends or family, how does one overcome these rough patches?
When entrepreneurs start, they either start alone or with co-founders.

These co-founders can be their friends or family members.

When they start alone and face failure, then they have no one to blame for their failure.

One major quality of entrepreneurs is that they don't blame others. An entrepreneur blames himself and tries to take corrective measures. But there are times when they are unable to correct things.

In that case, they come out of the business which others may call a failure, but they still come out with a lesson learnt.

What do you think are the common mistakes made by young entrepreneurs?
One mistake which they make is, using coolness as the reason to get into entrepreneurship. The second biggest mistake with a lot of people is that they tend to give up very easily, because the fire inside them is not strong enough. Also, there may be ups, downs, emotions and struggles.

So entrepreneurs need to be emotionally strong. One needs to understand that every business involves dealing with humans.

So they should give importance to the emotional quotient as well. Young people tend to treat customers in a very logical manner not giving emphasis to emotion. They end up thinking that businesses can be built without meeting people and end up making a lot of mistales in the process.

Do you think entrepreneurship is a way to develop India into a better and progressive nation?
Entrepreneurship is probably the only way to build this country. Take any example. Nowadays one sees a lot of good roads. They are there because of private companies.

So that drive to become successful, to make money and to create wealth is the real change we are seeing in the form of infrastructure.

How does one not get carried away by an initial success?
There is nothing wrong with feeling good about one's success. But people make a mistake by allowing success to go to their heads. Once that happens, they become complacent.

However, one should avoid dropping out merely because it's a cool thing to do or because someone like Bill Gates did it. The coolness factor is not the right reason to get into entrepreneurship.

Lastly, what are your future plans? Do we see any more books authored by Gagan Jain?
The initial response to the book was good. There was one objective which we wanted to achieve; that there is nothing wrong in thinking too big and we should all try to put our best foot forward.

We wanted people to read it, feel good and inspired. However there is a weakness in this book which we want to address in the next one.  We have not covered a single woman entrepreneur.  So our second book will cover only women entrepreneurs.

We are planning Start Up Diaries- part 2, which we will begin in six to eight months.