I am a very strong supporter of reason: Jimmy Wales

Jimmy Wales, founder of Wikipedia was named by TIME magazine as one of the world's most influential people in 2006. 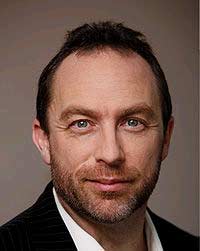 Wales started Wikipedia in 2001 along with Larry Sangers and what began as a quest to begin an online community is one of today's most popular website and also the world's first free open encyclopedia.

In 2004, together with Angela Beesley, Wales started another venture-Wikia.

In India recently on a short visit Wales spoke to correspondent Manisha Rawat about his ventures and plans ahead.

The Wikipedia entry on you says that you are an objectivist. If yes, then how do you reconcile your objectivist stand with the collectivist nature of Wikipedia?
Yes, I do consider myself an objectivist. I am a very strong supporter of reason, of individual purpose and self esteem. But the concept of Wikpedia is something I have been passionate about. It is my art work.

I don't encourage people to sacrifice their own values in favour of Wikipedia. Instead, I request them to think about how Wikipedia is valuable to their life and how one could achieve some personal growth by working in Wikipedia. I believe that my philosophy is certainly compatible with my work.