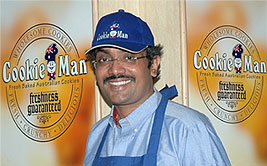 Chennai: He sampled 15 cookies at the Cookie Man''s outlet at Chennai''s Spencer Plaza while waiting for his sister to complete her shopping. A twinge of guilt at having freeloaded on so many, (each weighing around 12 grams) he bought a kilo out of courtesy sake and left for home.

A couple of months later he bought into the cookie company Australian Foods India Pvt Limited, an Indo-Australian joint venture.

Thirty-five year old S B P Pattabhi Rama Rao, now president, Australian Foods India Pvt Limited, recalls, "For three months after that purchase I was on tour. On my return I was surprised to hear that my father had begun eating cookies regularly and had brgun stocking them at home regularly." That made him wonder; his father, S B P V Rammohan Rao, heading the family''s sugar mill Saravaraya Sugar Mills, was a man with a frugal temperament and not known to patronise premium products.

"I called John Lynch, chairman and chief cookie taster and one of the promoters of the company and later bought into the company." The other promoters are private equity firm Paracor India Investments Limited, Mauritius, and Cookie Man Pty Ltd, Australia.

Prior to becoming Cookie Man''s shareholder-president, Rao headed the operations for Satyam Cinemas, a leading multiplex in Chennai. "Before that I was in the hospitality sector working at Tulip Star Hotels and The Indian Hotels Company."

More interesting is his wife''s association with Cookie Man''s cookies. A Bangalore person, she used to gift Cookie Man tins to her friends and relatives regularly before her marriage a year ago.