Prime Minister Narendra Modi has been conferred the Seoul Peace Prize 2018 for Economics, for his contribution to the economy of the country and the world. His role has also been critical in promoting regional and global peace, according to the organisers of the prize. 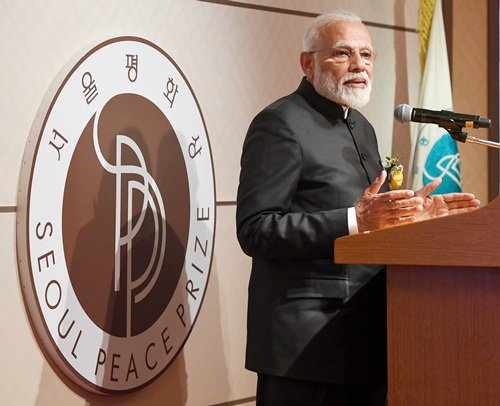 Modi was selected from among various candidates proposed by over 1,300 nominators from around the world.
In the official address, the South Korean presenter enlisted Modi’s achievements that led to this honour. "PM Modi has contributed to the economic development of the country and the world. He has been critical in promoting regional and global peace. "
Modi is credited with flag-ship initiatives such as ‘Make in India’, ‘Skill India’, ‘Digital India’, ‘Clean India’ that have contributed to visible socio-economic growth.
The Swachh Bharat Abhiyan is making India clean; from a sanitation coverage of around 38 per cent in 2014, the number today stands at 98 per cent! The Ujjwala Yojana is improving the lives of rural women through use of clean cooking fuel; Ayushman Bharat is providing health-care and insurance to 500 million poor and vulnerable people. All these initiatives, and many more, have contributed to holistic development and India's march towards achievement of the United Nations Sustainable Development Goals.
India’s growth story has not only been good for the people of India but also for the entire world. As the third largest economy, India’s growth and prosperity inevitably contributes to global growth and development, especially in an economically inter-linked world.
Earlier recipients of the Seoul Peace Prize include German Chancellor Angela Merkel, Bangladesh micro finance expert Muhammad Yunus, former United Nation Secretary-General Ban Ki-moon, former United Nations Secretary-General Kofi Annan, among others.
“PM @narendramodi was conferred #SeoulPeacePrize in an award ceremony organised by Seoul Peace Prize Foundation in recognition of his efforts in promoting global peace & harmony through inclusive economic growth & improving quality of life,” MEA spokesperson Raveesh Kumar tweeted.
"The Seoul Peace Prize does not belong to me, it is dedicated to the people of India and our country’s culture of peace and harmony. It's for the success India has achieved in the last 5 years, powered by the skills of 1.3 billion people," PM Modi said after accepting the award. "The success that India has achieved in the last 5 years is due to aspirations, inspiration and efforts of the people of India. On their behalf, I accept the Award and express my gratitude."
Earlier in the day, PM Modi and South Korean President Moon Jae-in held bilateral talks on cooperation in areas including trade, investment, defence and security. Modi's two-day visit to South Korea has been organised to strengthen India's strategic ties with the country, news agency PTI reported. The PM also met South Korean First lady Kim Jung-sook.
The PM also met South Korean First lady Kim Jung-sook.
"PM Narendra Modi and South Korean President Moon Jae-in held constructive talks on enhancing cooperation in trade and investment, defence and security, energy, space, Start-ups and people-to-people exchanges," Raveesh Kumar, spokesperson of the Ministry of External Affairs, said.
The Seoul Peace Prize was established to mark the success and spirit of the 24th Summer Olympics held in Seoul in 1988, which, incidentally, ended on Mahatma Gandhi’s birthday.
The games, which showcased the best of Korean culture, the warmth of Korean hospitality, and the success of the Korean economy, also marked the arrival of a new sporting power-house in the global arena!
The 1988 Olympics were held at a time of many changes in the world. The Iran-Iraq War had just ended. The Geneva Accords relating to the situation in Afghanistan had been signed earlier that year. The Cold War was ending, and there was great hope that a new golden age will soon dawn.
The world is better in many aspects today than it was in 1988. Global poverty has been steadily falling; health-care and education outcomes have been improving; and yet, many daunting global challenges remain - some are old, some new.
A few months before the Seoul Olympics, the first public warnings about climate change were sounded. Today, it is recognised as a big threat to human-kind. A few weeks before the Seoul Olympics, an organisation called Al-Qaeda was formed. Today, radicalisation and terrorism have become globalised and are the biggest threats to global peace and security. And, millions of people around the world still remain without adequate and quality access to food, shelter, health-care, sanitation, power, and above all, dignity of life. Clearly, there is a lot more that needs to be done.
MORE REPORTS