The former first citizen and Congress veteran, Pranab Mukherjee on Thursday tried a balancing act in his speech at the RSS headquarters in Nagpur, praising the country’s pluralistic nature even as he refrained from outright political references. 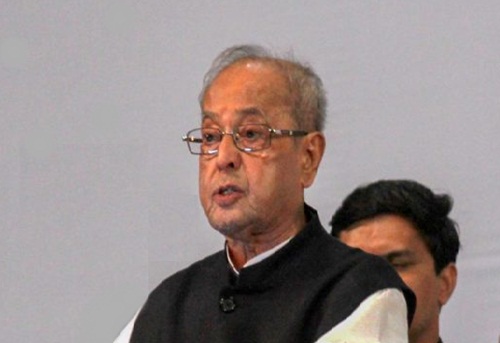 Addressing the RSS at its headquarters, Mukherjee also put forth his understanding of the concepts of nationalism and patriotism, while avoiding to score any political points.
His visit to the RSS headquarters is arguably the first for a senior Congress leader, even if he is currently not a member of the party.
India, he said, was an open society, open to global commerce and trade much before the invasions by Muslim warriors and the imperialist forces of the West.
The busy highways of commerce and conquest also opened the way for an assimilation and exchange of culture and faith.
Buddhism reached Central Asia, China and Southeast Asia together with Hindu influences while Islam and Christian faiths found acceptance in India.
He said India’s national identity has emerged after a long drawn process of confluence, assimilation and coexistence. The multiple cultures and faiths make us special and tolerant. We derive our strength from tolerance. We accept and respect our pluralism. We celebrate our diversity.
"Our national identity has emerged through a long drawn process of confluence, assimilation, and co-existence. The multiplicity in culture, faith and language is what makes India special," he said.
Mukherjee reminded his audience, "We derive our strength from tolerance. We accept and respect our pluralism. We celebrate our diversity. These have been a part of our collective consciousness for centuries. Any attempt at defining our nationhood in terms of dogmas and identities of religion, region, hatred and intolerance will only lead to dilution of our national identity. Any differences that may appear are only on the surface but we remain a distinct cultural unit with a common history, a common literature and a common civilization."
India's nationhood is not one language, one religion and one enemy. Its 1.3 billion people use more than 122 languages and 1,600 dialects, practice seven major religions and belong to three major ethnic groups — Aryans, Mongloids and Dravidian.
As Gandhiji explained, Indian nationalism was not exclusive nor aggressive nor destructive.
He said people are at the centre of all activities of the state, and nothing should be done to divide them. The aim of the state should be to galvanise them to fight a concerted war against poverty, disease and deprivation. Only then can we create a nation where nationalism flows automatically.
In a democracy, informed and reasoned public engagement on all issues of national importance is essential. A dialogue is necessary not only to balance the competing interests but also to reconcile them.
Mukherjee, who spoke in English and copies of whose speech were distributed to the press by the RSS, told the organisation’s cadres that “since they were trained and disciplined”, they should endeavour to free “our public discourse from all forms of violence, physical as well as verbal”.
Mukherjee also spoke about the ideals that the RSS hold dear like `Vasudhaiva Kutumbakam’ (the whole universe is my family) and `Sarve Bhavantu Sukhinah, Sarve Santu Niramayah’ (let all be happy, let all be free from all malaises).
The former president recalled that India was always an open society and defined Indian nationalism as “universalism”, which was distinct from the one based on a defined territory, a single language, shared religion, and a common enemy. He also quoted from Nehru’s Discovery of India, saying “nationalism can only come out of the ideological fusion of Hindu, Muslim, Sikh, and other groups in India”.
Mukherjee on Thursday visited the birth place of the RSS founder Keshav Baliram Hedgewar ahead of his much-anticipated speech at the Sangh headquarters in Nagpur.
"Today I came here to pay my respect and homage to a great son of Mother India,” Mukherjee said after the historic visit that was not part of the schedule.
Mukherjee also attended the annual training camp at the RSS headquarters, where he witnessed the RSS cadre take part in a parade. He also garlanded the statue of the Sangh founder.
MORE REPORTS