Ivanka Trump raises a toast to Modi and India's evolution

Ivanka Trump on Tuesday hailed Prime Minister Narendra Modi for heralding a transformational change in India and inspiring people around the world with his bold initiatives. 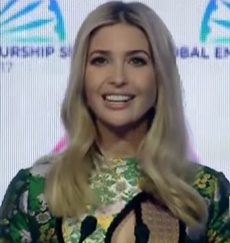 Addressing the inaugural session of the Global Entrepreneurship Summit in Hyderabad in the evening, Ivanka - daughter of US President Donald Trump - said PM Modi is a symbol of democracy and his journey has been incredible.

"I would like to thank Mr Narendra Modi for having me here. His journey from being a tea-seller to the Prime Minister of India is great. What you are achieving here is incredible," she said. "I would also like to congratulate Indians for being an inspiration to people all around the world. You have shown you are not afraid to fail and are going beyond the ordinary. You have the grit, the perseverance and a will to succeed."

On Indo-US friendship, she said ties between the two countries will only grow closer in the times to come. "We are committed to even better relations between our two great nations," she said.

Ivanka also spoke highly of women entrepreneurs in India and around the world. "I especially want to congratulate the women entrepreneurs here today," she said.  "Many women become entrepreneurs out of necessity. Fueling the growth of women-led businesses is not only good for the society but for the nation. Here in India, I want to applaud PM Modi for his firm belief that the progress of a community is incomplete without empowering women."

The Global Entrepreneurship Summi, attended by 1,500 entrepreneurs and investors from 150 countries, had been overwhelmed with thousands of applications, officials said.

Ivanka Trump, who is also a fashion designer and a businesswoman, met PM Modi earlier in the day on the sidelines of the summit that is being jointly hosted by India and the United States.

Ivanka was invited by Modi during his visit to the White House in June to speak at the summit. She is leading the US contingent at the summit, which has 'Women First, Prosperity for All' as its theme.

As political and economic ties expand, India has become a major market for the United States, with two-way trade of about $115 billion last year. Military and strategic ties are also improving as China's influence rises in Asia and beyond.

Modi will host a dinner for her later in the evening.