Renowned space scientist and well known educator Professor Yash Pal passed away at his residence in Noida today morning. He was 90. 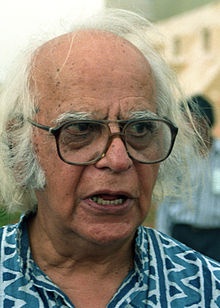 While the cause of death was not immediately known, he had reportedly recovered from cancer a few years ago.

Yash Pal, also known as Yash Pal Singh, was known for his contributions to the study of cosmic rays, as well as for being an institution-builder. He was also chairman of the University Grants Commission (UGC).

A familiar face on TV, Professor Yash Pal was a great communicator on science. He became a cult figure because of the weekly science programme on Doordarshan called 'Turning Point', hosted by Girish Karnad.

He was the author of a major report, which argued for reducing the burden in the school bags for children.

In 2013, he was awarded the Padma Vibhushan, the country's second highest civilian honour, for his contribution to science and space technology.

The prime minister also shared his picture with the eminent scientist.

Professor Yash Pal was born in 1926 in Jhang, now in Pakistan, and was raised in Kaithal in what is now Haryana. He graduated from Punjab University with a degree in Physics in 1949.

The highly-regarded academic began his career at Mumbai's Tata Institute of Fundamental Research. He was a member of the 'cosmic rays group'. He then attended the Massachusetts Institute of Technology for his PhD, after which he returned to the Tata Institute, where he remained until 1983.

In 2009, he received the Kalinga Prize, awarded by UNESCO for the popularisation of science.

He was awarded the Padma Vibhushan in 2013.