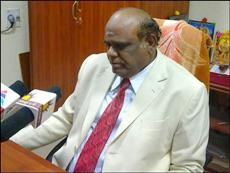 Justice C S Karnan of the Calcutta High Court will today become the first judge of a high court to retire while being wanted and untraceable. In May this year the controversial judge became the first sitting high court judge to be convicted by the Supreme Court in a contempt of court case, for which he was awarded a six-month sentence.

Justice Karnan has been absconding since 9 May when a seven-judge bench of the Supreme Court passed an unprecedented arrest order against the high court judge (See: SC sentences Justice Karnan to 6 months' jail for contempt).

Karnan, who turned 62 today, was appointed Madras High Court judge in the year 2009, and was transferred to West Bengal in the year 2016 by the Supreme Court.

Karnan courted controversy in January 2017, when he named 20 sitting and retired Supreme Court and High Court judges as being corrupt. In May, a seven-judge bench sentenced the judge to six months' jail finding him guilty of contempt of court. The order came a day after Karnan ordered the arrest of eight apex court judges.

In November 2011, he became the first judge of a high court to move the National Commission for Scheduled Castes and Scheduled Tribes, complaining of harassment by fellow judges. He was the first judge to barge into the court hall of another division bench (of the Madras High Court) while it was hearing a case and declare that he too would be a litigant opposing the choice of certain names of advocates for elevation as judges of the court.

On 18 May, the judge filed a mercy plea before President Pranab Mukherjee seeking a stay on the SC's arrest order. According to his counsel Peter Ramesh Kumar, the mercy plea was filed under Article 72 1B of the Constitution.

"Since Karnan is set to retire in June, sentencing him to jail will delay clearance of his retirement benefits," Kumar said.

Before the West Bengal Police could arrest Karnan, the judge reportedly left for Chennai and has been untraceable ever since.

Despite a team of West Bengal police stationed in Chennai, the police has been unable to apprehend Justice Karnan yet, even with the help of Tamil Nadu police.

Because of the Supreme Court's order, Justice Karnan will not receive a formal farewell and will not get a chance to give his farewell speech at the court, becoming the first high court judge to miss out on his farewell.