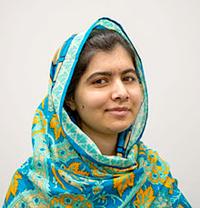 Malala Yousafzai, the youngest-ever Nobel Prize laureate, was bestowed with an honorary Canadian citizenship on Wednesday, and made some quips that have gone viral as she was warmly welcomed in the Canadian parliament by Prime Minister Justin Trudeau.

Addressing the parliament, the Pakistani activist for female education – who was shot and almost killed by the Taliban for espousing female education in her home district of Swat - spoke about women empowerment, educating the girl child and the tragic situation of refugees.

Yousafzai didn't shy away from talking about the thing that has surprised her most about the prime minister. She said, ''We have heard so much about Prime Minister Trudeau but one thing has surprised me: people are always talking about how young he is. They say that he's the second-youngest Prime Minister in Canadian history. He does yoga. He has tattoos. And a lot more…,'' and left everyone is splits.

''When I was coming here, everyone was telling me, like, 'Shake prime minister's hand and let us know how he looks in reality,''' she continued, adding, ''and people were just so excited about my meeting Trudeau. I don't think anyone cared about the honorary Canadian citizenship.'' Both Trudeau and his wife flushed in pink while the others laughed out loud on Malala's words.

Showing off her quick wit while referring to the citizenship, Yousafzai went on to say, ''I am humbled to accept the citizenship of your country and grateful to be an honorary member of your nation of heroes. Though I still require a visa. But that's another discussion.''

With the pinch of humour towards the end of the speech, the 19-year-old left the house cheering for her. While she is already known as a braveheart, her witty and funny side surprised many. Trudeau shared the live coverage of the event on his Facebook page.