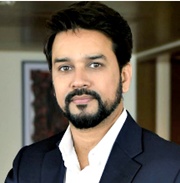 The Supreme Court on Thursday observed that Anurag Thakur, chairman of the Board of Control for Cricket in India (BCCI), prima facie appears to have committed perjury by writing to the International Cricket Council (ICC) seeking its intervention in order to sidestep the implementation of the Justice R M Lodha Committee recommendations.

The apex court, which is hearing the Lodha panel's third status report that asked for the removal of top officials of the BCCI, asked amicus curiae Gopal Subramaniam whether Thakur had committed perjury or not in the case.

In reply, the amicus curiae revealed that the BCCI chief had, in his affidavit submitted to the top court, said that he sought Shashank Manohar's opinion as BCCI chairman. But this was denied by the latter, who said it was asked in the ICC meeting.

If Thakur is found to have committed perjury then he might land in jail.

The three-member apex court bench headed by Chief Justice T S Thakur also asked the country's cricket board to suggest a name for the post of administrator and also granted them one week's time for the same.

Meanwhile, the court also reserved its order on replacing BCCI's top management with a panel of administrators.

The final order on Thakur's purported misdemeanour will now be taken up on 3 January when the court returns after the winter break.

Earlier in December, the BCCI had conducted a Special General Meeting (SGM) to discuss how they would respond to the Lodha Committee's demands for radical changes in the Indian cricket board.

Following the meeting, the BCCI's firm stance opposing the Lodha panel recommendations continued, with honorary secretary Ajay Shirke revealing that the board members will abide by the decision they had taken during the first SGM on 1 October, when the board had accepted many of the ''significant recommendations'' of the Lodha Committee, but excluded important ones which have been a bone of contention between the cricket body and the Lodha panel.

The recommendations, which have still not been accepted by the 30-member committee include one-state one-vote, age limit of 70 years, cooling-off period of three years which included the tenure of the administrators, continue with the five selectors and retaining the powers of the president and secretary as per the earlier constitution of the board.

The cricket board has consistently argued that they have implemented many of the Lodha panel's recommendations and their members have problems in implementing only some of them.

On 21 October, the top court passed an interim order asking the BCCI to ''cease and desist'' from disbursing funds to state associations until the association gave a written resolution that it would adopt all the recommendations approved by the court.

The court also asked Thakur and secretary Ajay Shirke to meet the Lodha committee within two weeks from the date of that order and submit an ''affidavit of compliance'', elaborating on the recommendations already implemented by the BCCI and what it had done to persuade the state associations to adopt the remaining recommendations.

The three-member Lodha Committee was appointed by the Supreme Court after the 'conflict of interest' issue sparked a controversy in Indian cricket.

The Lodha Committee, in its first status report submitted to the apex court on 28 September, had asked for the removal of the present set of BCCI office-bearers, to be replaced by a group of independent administrators.

In its third status report submitted on 14 November, the committee altered the demand a bit, asking for the disqualification of office-bearers of the BCCI and all state associations, who become ineligible as per the apex court's 18 July order, and the appointment of former Union home secretary G K Pillai as ''observer''.