The Nobel Prize in Literature for 2016 has been awarded to American singer-songwriter Bob Dylan for "having created new poetic expressions within the great American song tradition," making him the first musician to win the prestigious Nobel Prize in literature. 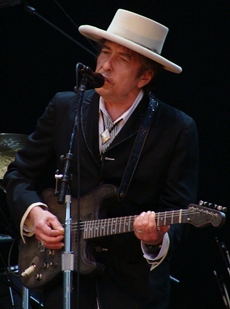 "He can be read and should be read, and is a great poet in the English tradition," Sara Danius, permanent secretary of the Swedish Academy, told freelance journalist Sven Hugo Persson about the 2016 Nobel Prize in Literature to Bob Dylan in an interview after the award.

Dylan, 75, is arguably the most iconic poet-musician of his generation. Songs such as `Blowin' in the Wind' and `The Times They Are A-Changin' became anthems for the US anti-war and civil rights movements of the 1960s.

His impact on popular culture was great and people who gathered at the Swedish Academy's headquarters in Stockholm's Old Town greeted the announcement of his selection for the award with a loud cheer.

While Dylan performs his poetry in the form of songs, that's no different from the ancient Greeks, whose works were often performed to music, said Danius.

"Bob Dylan writes poetry for the ear," she said. "But it's perfectly fine to read his works as poetry."

Dylan is the first American winner of the Nobel prize in literature since Toni Morrison in 1993.

Bob Dylan was born on May 24, 1941 in Duluth, Minnesota. He grew up in a Jewish middle-class family in the city of Hibbing. As a teenager he played in various bands and with time his interest in music deepened, with a particular passion for American folk music and blues. HE was influenced by folk singer Woody Guthrie as also the early authors of the Beat Generation.

Dylan moved to New York in 1961 and began to perform in clubs and cafés in Greenwich Village. He met the record producer John Hammond with whom he signed a contract for his debut album, called Bob Dylan (1962). In the following years he recorded a number of albums which have had a tremendous impact on popular music: Bringing It All Back Home and Highway 61 Revisited in 1965, Blonde On Blonde in 1966 and Blood On The Tracks in 1975. His productivity continued in the following decades, resulting in masterpieces like Oh Mercy (1989), Time Out Of Mind (1997) and Modern Times (2006).

Dylan's tours in 1965 and 1966 attracted a lot of attention. For a period he was accompanied by film maker D A Pennebaker, who documented life around the stage in what would come to be the movie Dont Look Back (1967). Dylan has recorded a large number of albums revolving around topics like the social conditions of man, religion, politics and love. The lyrics have continuously been published in new editions, under the title Lyrics. As an artist, he is strikingly versatile; he has been active as painter, actor and scriptwriter.

Besides his large production of albums, Dylan has published experimental work like Tarantula (1971) and the collection Writings and Drawings (1973). He has written the autobiography Chronicles (2004), which depicts memories from the early years in New York and which provides glimpses of his life at the center of popular culture. Since the late 1980s, Bob Dylan has toured persistently, an undertaking called the ''Never-Ending Tour''. Dylan has the status of an icon. His influence on contemporary music is profound, and he is the object of a steady stream of secondary literature.