American epidemiologist Donald ''D.A.'' Henderson,  who led the international war on smallpox till its eradication in 1980, died on Friday, 19 August. 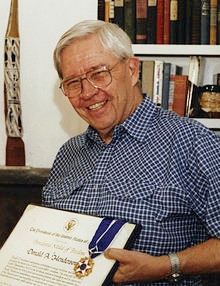 Henderson died at a hospice facility in Towson, Maryland, aged 87.

Henderson, who called himself a ''disease detective,'' spent the defining years of his career as an official of the Centers for Disease Control and Prevention and the World Health Organization.

He later served as a dean of Johns Hopkins University's school of public health and as a science and bioterrorism adviser with three presidential administrations.

However, his crowning achievement was the eradication of smallpox, a scourge which killed an estimated 300 million people in the 20th century alone and earned him fame across the world.

Henderson was lent to the WHO for a decade in the 1960s and 1970s, by the CDC and during the period he commanded a small cadre of public-health officials and an army of field workers.

Richard Preston, the best-selling author of books including The Hot Zone about the Ebola virus, and The Demon in the Freezer about smallpox,  told Newsday.com,  ''I think it can be fairly said that the smallpox eradication was the single greatest achievement in the history of medicine.''

Preston described Henderson as a ''Sherman tank of a human being - he simply rolled over bureaucrats who got in his way.''

The 1966-1977 smallpox programme was initially given little chance of succeeding. It called for the development of labs around the world to produce vaccines, a constant scramble for funding, forcing governments to join in, and halting outbreaks as soon as they emerged by focusing on vaccinating people who came in contact with those infected.

"The most important legacy of smallpox eradication was its demonstration of how many people could be protected through vaccination, so rapidly and inexpensively with a well planned program and quality-control monitoring," the man known as "D.A.," said in an interview published by the World Health Organization a few years ago.