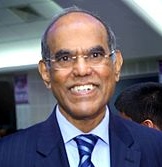 Former Reserve Bank of India governor Duvvuri Subbarao had a fairly stormy relationship with the then United Progressive Alliance government during his five-year tenure between 2008 and 2013, going by his book, Who moved my interest rate? Leading the Reserve Bank of India Through Five Turbulent Years.

Released at a time when current RBI governor Raghuram Rajan is in the news, it clearly aims to portray Subbarao as one not afraid to stand up to government pressure.

Among the many incidents in the 308-page book, it says that as early as in mid October 2008, one and a half months after Subbarao landed at RBI headquarters, the then finance minister P Chidambaram overstepped into the RBI's domain to form committee on liquidity management.

An annoyed Subbarao called up Chidambaram to tell him that his action was totally inappropriate, and requested that he dissolve the committee. Chidambaram's argument was that getting advice from market participants would help. "I granted that, but if he wanted external experience to be tapped, he could have advised me informally to constitute such a committee rather than taking Reserve Bank for granted," writes Subbarao.

The call ended with Subbarao telling him that the RBI would not participate in the committee.

Subbarao writes that while the interest rate regime had been the main area of difference between the government and the RBI, there were also other issues like estimate of growth and fiscal stance that stoked the friction even deeper. "The government's pet peeve was that the Reserve Bank was being too cynical in its forecasts," writes Subbarao. The government wanted RBI to project a higher growth rate and a lower inflation rate in order to help the government in ''shoring up sentiment''.

"Finance secretary Arvind Mayaram went to the extent of saying in one meeting that whereas everywhere else in the world, government and central banks are cooperating, here in India the Reserve Bank is being very recalcitrant," writes Subbarao.

Deficit and inflation
Another constant source of friction was the position taken by the Reserve Bank on the government's fiscal stance. A large fiscal deficit was one of the critical elements in driving up inflationary pressure. "The finance ministry used to be irritated by the Reserve Bank making an issue out of its fiscal stance and Pranab Mukherjee was always miffed about it; he clearly showed it even though he never said anything," writes the former governor.

On the styles of Chidambaram and Mukherjee, Subbarao writes that that Chidambaram would always meet him alone, whereas meetings with Mukherjee were more formal and larger in setting with all the secretaries of the finance ministry and advisors.

There was also a difference at a substantive level. "Mukherjee's stance was straightforward - that the Reserve Bank should ease on the interest rate to support growth. Chidambaram, on the other hand, was more nuanced; he believed that I should cut rates in acknowledgement of his efforts at fiscal consolidation and assert more firmly and forcefully," writes Subbarao.

While there has been a standard practice between the government and the Reserve Bank to keep their differences out of the public domain, Chidambaram deviated from this in October 2012 when he went public with his displeasure at the Reserve Bank's decision not to cut interest rates. Subbarao writes that the events leading to this public rebuke of RBI started unfolding in the week before the policy.

In the pre-policy meeting, Subbarao told Chidambaram of his decision to stay put on the policy rate in view of the inflation situation and the continued concern about the fiscal situation which was undermining the fight against inflation. "He was clearly unhappy with my proposed decision, was upfront with it and argued strongly for a rate cut. I did not believe I could yield," writes Subbarao.

Just a day before the policy meeting, Chidambaram took the battle forward by unveiling the government's road map for the fiscal deficit in a hurriedly convened media conference. When Chidambaram was asked if the RBI would cut rates based on his announcement, he used the opportunity to send a loud message from Delhi to Mumbai via the media; "I sincerely hope everybody will read the statement and take note of that."

Subbarao was not prepared to be let down yet again by the government's promise on fiscal targets."My refusal to fall in line had evidently upset Chidambaram enough to do something very unusual and uncharacteristic - to go public with his strong disapproval of the Reserve Bank stance," he writes. And Chidambaram came out with his comment: "Growth is as much a concern as inflation. If the government has to walk alone to face the challenge of growth, we will walk alone."

Extension or sack?
Subbarao has also written about the period when his extension was due. Seven weeks before his three year term was to expire, Subbarao was meeting Prime Minister Manmohan Singh at 7 Race Course Road as part of his regular pre-policy briefing. "Has the finance minister spoken to you about your extension? asked the PM. Subbarao said no. "You are doing well at RBI and there is no reason why you should not serve a full five year term like others," suggested PM. When there was still more than a month of his tenure left, T K A Nair, Principal Secretary to the PM, called to check if the finance minister had spoken about his extension. Subbarao told him no.

Subbarao writes that one issue in this whole process of reappointment that provided grist for the media mill was the way in which the announcement came from the prime minister's office, on its website, rather than from the ministry of finance. "Did this indicate a tussle between the PM and the FM? Did this suggest that the PM uncharacteristically pushed for my extension overruling the FM's reservations? asked Subbarao. If indeed, FM was against an extension for me, wouldn't that impair the already fraught relationship between the two of us?

"I am no wiser than anyone else on the first question … on the second question, I must say that my relationship with Mukherjee remained exactly as before…."