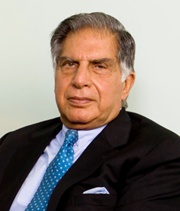 Tata Group chairman emeritus Ratan Tata has been inducted into the Automotive Hall of Fame for his contribution to the automotive industry and the turnaround of Jaguar Land Rover.

The 77-year old Tata was honoured along with former Ferrari chairman Luca Di Montezemolo and the founder-chairman of Penske Corporation, Roger Penske at a ceremony held in Detroit on 23 July.

Tata Motors is one of the India's largest automobile companies and also owns Jaguar Land Rover.

The car maker was instrumental in turning around the fortunes of Jaguar and Range Rover brands after acquiring it in 2008.

By taking over JLR, Tata helped save 33,000 jobs in England, "while preserving the rich tradition of performance and style that are the signature of these marques. Clearly his vision is the reality,'' Michael Martini, Automotive Hall of Fame chairman said.

Tata Group has grown to 96 companies across 56 countries, employing over five lakh people and churning out revenues over $100 billion.