S Jaishankar, who was so far India's ambassador to the US and played a key role during Prime Minister Narendra Modi's visit to the US in September and US President Barack Obama's just concluded visit here, today took charge as the new foreign secretary. 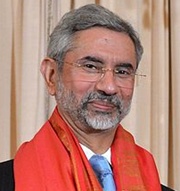 He replaces Sujatha Singh, who was unceremoniously dismissed eight months before her tenu and e officially ended.

The controversial dismissal of Singh came soon after US President Barak Obama ended his Delhi visit, prompting the opposition Congress to question the timing of Jaishankar's appointment and the removal of his predecessor Singh before her tenure ended.

As he took over, the new foreign secretary said, "I am really honoured to have been given this big responsibility. My priorities are the same as the government's priorities."

The Narendra Modi government announced Dr Jaishankar's appointment after a meeting of the Appointments Committee of the Cabinet, chaired by Prime Minister Narendra Modi, last evening.

A terse official statement said the tenure of Singh, who took over as India's third woman foreign secretary in August 2013 (under the previous UPA government), has been "curtailed" with immediate effect. She was due to retire in August this year.

Reports said external affairs Minister Sushma Swaraj favoured Sujatha Singh completing her two-year tenure, but PM Modi is said to have been very keen to get on board Jaishankar, who before his key Washington posting was India's longest serving ambassador to China.

The Congress' Manish Tewari said this morning, "If the PM was unhappy with the foreign secretary, why didn't he ask her to go nine months ago. The timing is questionable. Why wait for the presidential visit to end? Did something happen during the visit? The PM needs to explain."

Jaishankar, 60, is the son of K Subrahmanyam, who was one of India's leading strategic analysts. He was a key member of the team that negotiated the nuclear deal with the US in 2008, when Dr Manmohan Singh of the Congress was Prime Minister.

A 1977 batch officer of the Indian Foreign Service, Jaishankar was reportedly Dr Singh's first pick to replace Ranjan Mathai as Foreign Secretary in 2013. But the then PM was reportedly advised by senior leaders of the Congress to go by seniority, and Ms Singh was appointed.

"The government has the right to appoint any officer. Many of the previous governments have done this. I don't know why the Congress is making this a political issue. The Modi government wants to make India strong, " said the ruling BJP's Nalin Kohli.

Sujatha Singh's premature removal is the first such case since the controversial dismissal on national television of A P Venkateswaran as foreign secretary by then prime minister Rajiv Gandhi in 1987.

Jaishankar was first posted as third secretary and then as second secretary (political) at the Embassy of India in Moscow between 1979 to 1981.

He then served as under secretary (Americas) and policy planning in the ministry of external affairs from 1981 to 1985.

Jaishankar acted as commercial counsellor in Budapest for three years beginning 1990 and then returned to India to serve as director of East Europe division of the ministry of external affairs and then as press secretary for the President of India.

In 1996, he was posted in Tokyo as deputy chief of mission and in 2000, he was appointed the ambassador of India to Czech Republic where he served till 2004.

Jaishankar then returned to India and led the Americas division in the MEA for three years, before being posted as Indian high commissioner in Singapore in 2007. After a two-year stint there, he was designated as the Ambassador of India to China from 2009 to 2013.

A member of the International Institute for Strategic Studies in London, Jaishankar holds a PhD and an MPhil in International Relations and an MA in political science.

He is married to Kyoko Jaishankar and has two sons and a daughter.

Jaishankar, who took over on Thursday, will preside over the first heads of mission meeting called during the NDA government in February. Analysts expect a slew of changes at the foreign ministry following Jaishankar's appointment.