Jagdish Bhagwati seen as advisor to a Modi government

Jagdish Bhagwati, the chief protagonist of free trade and globalisation, is expected to have a leading role in policy formation if the Bhartiya Janata Party gets to form a government at the centre and Narendra Modi becomes the prime minister. 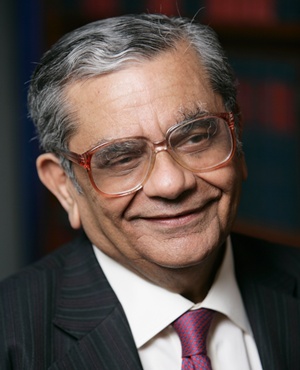 Since Modi has taken the platform of economic revival, Bhagwati is seen as the right candidate to urge him on the need to allow more foreign investment and freer trade to spur growth and rein in government spending.

The jinx is whether the new government would turn out to be protectionist or pro-market.

A Reuters report, however, quoted the eminent economist as saying that he saw himself on an external force advising the prime minister in a Modi government.

"I'd be glad to chair something like that, and I think that's what they might do," Bhagwati said.

"The kind of person they would want, and I think correctly, as a chief economist would be my co-author [Arvind Panagariy], who is about 60 compared to my 80. I don't have that kind of energy anymore," Bhagwati was quoted as saying.

The two have co authored India's Tryst with Destiny: Debunking Myths that Undermine Progress and Addressing New Challenges and Why Growth Matters: How Economic Growth in India Reduced Poverty and the Lessons for Other Developing Countries.

The report added that people close to Modi had approached Bhagwati to ask about Arvind Panagariya's suitability for the role.

The deciphering comes from enquiries by BJP sources about the suitability of Panagariya, a protégé of Bhagwati, in the role of chief economist to the prime minister if Modi comes to power.

If Panagariya with his Bhagwati brand free-market thinking is acceptable to a BJP government, Bhagwati himself would be a better candidate for the role.

Bhagwati is reported to have made it clear that in order "to enhance growth, he will need to promise that India will open more to trade and FDI."

He wants the next government to position India as a trading power, negotiating deals on its own terms and entering regional pacts such as the Trans-Pacific Partnership being negotiated between the United States and East Asian nations.

Bhagwati is also for free flow of foreign capital, a policy opposed by the BJP, at least in the case of allowing foreign retailers like Wal-Mart and Tesco free access to Indian markets.

There is a catch here. If the two Columbia University economists start working for a Modi government, it would antagonise protectionist factions within the party and its NDA allies.

A BJP spokeswoman did not confirm or deny the possibility, merely saying that she was not aware of any plans to invite Bhagwati and Panagariya to advise.

Much will also depend on the likely majority the party may get and the elbow room that Modi may get in a potential NDA or BJP government.