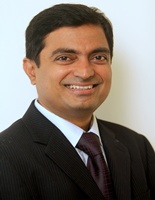 He Ram brings to Magma about 16 years of IT leadership experience in the BFSI and the IT industry. Prior to joining Magma, he headed IT at ICICI Lombard.

An alumnus of IIM Bangalore and Osmania University where he studied Computer Science, Ram has received the CIO 100 award by the CIO Magazine consecutively in 2012 and 2013.