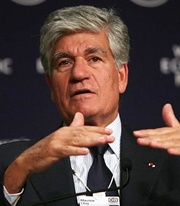 The Indian advertising market seems to have caught the attention of the world's top publicity firm, France-based Publicis Groupe SA, as its chairman of the management board and CEO, Maurice Levy is on a visit to India soon after one of the biggest-ever M&A deals in the sector, in which Publicis acquired Omnicom Group Inc.

In interviews to various sections of the media, Levy said Publicis plans to make major investments in India, including acquisitions. But he cautioned that India is not growing fast enough due to a number of reasons, including politics and lack of infrastructure.

On Saturday, he is scheduled to speak on India's brand image at a FICCI event in New Delhi.

''The Indian market is not a digital market,'' he said.

Levy is here to review the operations of Publicis firms in India, which include ad agencies Leo Burnett, Saatchi & Saatchi and flagship Publicis India; media agencies Starcom and Zenith Optimedia; and digital agencies Razorfish and Digitas.

Levy, a 71-year-old Frenchman, is the oldest of the top three most powerful CEOs in the ad world - WPP's Martin Sorrell is 68 and Omnicom's John Wren 60. On Saturday, he will speak on India's brand image at a Federation of Indian Chambers of Commerce & Industry (FICCI) event in New Delhi.

On the $35-billion deal between Publicis, the No 3 firm in the sector, with No 2 Omnicom, Levy said finalisation would take time as the two networks cross regulatory hurdles across markets.

The two holding companies have already put an integration team in place. Levy said this team had organised ''70 work streams'' for the two groups to look at synergies. ''What Omnicom gets from this merger is our expertise and prowess in digital and e-commerce. What we get is access to Omnicom's abilities in customer relationship management. It is a win-win for all,'' he said.

The all-stock merger of the Publicis and Omnicom groups will create an entity with a combined market capitalisation of approximately $35.1 billion or €26.5 billion. Shareholders of Paris-based Publicis and New York-based Omnicom will each hold about 50 per cent of the new entity, Publicis Omnicom Group.

The new holding company will be based in the Netherlands, with operating offices in Paris and New York. Publicis and Omnicom expect the merger to result in savings of about $500 million.

Publicis Omnicom Group will be jointly led by Omnicom CEO John Wren and Publicis Groupe CEO Maurice Lévy as co-chief executives. Omnicom chairman Bruce Crawford will be chairman of Publicis Omnicom for the first year following the deal's completion, after which Publicis's Elisabeth Badinter will take over. Levy will become chairman after an integration and development period of 30 months.

However in India, WPP is double the size of the Indian operations of Publicis-Omnicom and Interpublic Group.