The World's Most Powerful People 2013 list released by the Forbes showed the 'shifting individual power dynamics' as Russian leader Vladimir Putin pipped US president Barack Obama to the top  position on the list, surging on his Syrian manoeuvre and asylum to Edward Snowden. 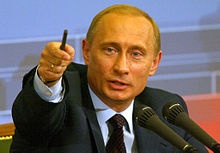 Putin emerged as the most powerful among the power elite as he "solidified his control over Russia" in sharp contrast to the chaos created by the US government shutdown and Edward Snowden leaks of the NSA surveillance programmes pushing Obama into a "lame duck period" that came in earlier than ususual for a two-term president, according to a post written by the Forbes staff Caroline Howard.

The post further spoke about what it referred to as "the chess match over Syria and NSA leaks" hinting at the same time how the Russian president outshone Obama with his Syria strategy that led to the country accepting chemcial weapons' dismantling plan and averting a planned strike by US missiles.

The Forbes list is a compilation of top 72 people from around the world drawn up on the basis of four factors for their inclusion and position: how many people they exercised power over; the financial resources they controlled; if they had power in more than one sphere; and how actively they wielded their power to change the world, according to Forbes.

"Anyone watching this year's chess match over Syria and NSA leaks has a clear idea of the shifting individual power dynamics," Forbes said.

Chinese president Xi Jinping, who is expected to rule for a decade took the third spot, as China hopes to overtake the US as the world's largest economy.

Pope Francis made his debut at number four while German chancellor Angela Merkel made it to the top five.

Samsung chairman Lee Kun-Hee made the list at 41 and was among 13 new comers. Nigerian billionaire Aliko Dangote, the richest man in Africa, was placed at 64.

The list includes 17 heads of state who run nations with a combined GDP of $48 trillion while the 27 CEOs and chairs in the list control over $3 trillion in annual revenues.

The list included only nine women despite women representing half the world's population.