A 91-year-old former chief of an Islamic party in Bangladesh, Ghulam Azam,  was awarded a 90-year jail term today for crimes against humanity during the country's 1971 independence war.  Supporters of the party chief angry with the punishment said the trial was politically motivated and while opponents who were equally angry, called for his execution. 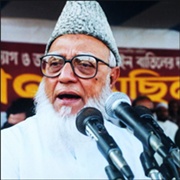 The decision against Ghulam Azam was handed down by a special tribunal of three judges, in a packed courtroom in Dhaka, the capital. According to the panel, the former leader of the Jamaat-e-Islami party deserved capital punishment, but received a jail sentence instead because on considerations of his advanced age and poor health.

Azam was in the dock at the time of the delivery of the verdict while protesters outside rallied to demand his execution. The defence as also the prosecution said they would appeal.

Azam led Jamaat-e-Islami in then-east Pakistan in 1971 when Bangladesh gained independence through a bloody war. He is among several leaders of the Jamaat-e-Islami to be convicted by a tribunal formed in 2010 by the government of prime minister Sheikh Hasina to try those accused of collaborating with the Pakistani army in the war.

According to Bangladesh, the Pakistani army killed 3 million people and raped 200,000 women during war, with some 10 million people taking shelter across the border in India.

Soon after Bangladesh's independence, he went over to Pakistan and took Pakistani citizenship, but continued to carry out his anti-Bangladesh propaganda, discrediting Bangladesh among international community, particularly among the Middle East countries.

In 1973 he went to London and set up the headquarters of the PPPC.

He even published a newspaper 'Sonar Bangla', ironically for carrying on political propaganda against Bangladesh.

In March 1975, Azam met the Saudi Arabian King Faisal and sought the latter's support against Bangladesh. He told the king that Hindus had taken over Bangladesh and were converting mosques into temples.

He thus managed to collect huge amounts of funds for reconstruction of mosques and madrasas.

He returned to Bangladesh seven years following the liberation war, on a Pakistani passport.

According to the formal charges against Ghulam Azam, he returned to Bangladesh in 1978 following the assassination of Bangabandhu Sheikh Mujibor Rahman.

After Bangladesh's  liberation Azam started conspiring against the country and formed a 'Purbo Pakistan Punoruddhar Committee (PPPC)', according to the charges brought against him.