On Day One, Pope Francis slips into basilica for private prayers 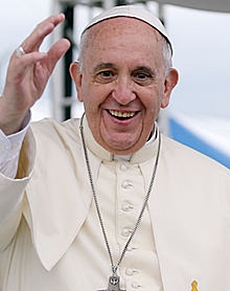 Pope Francis, the first pontiff to take that name, began his first full day in office today with private prayers at a Roman basilica dedicated to the Virgin Mary.

The former Cardinal Jorge Mario Bergoglio slipped into the building by a side door without fanfare and left some 30 minutes later to return to the Vatican.

While his precise schedule remained uncertain, Francis, an Argentine and the first non-European prelate to win the leadership of the Roman Catholic Church in 12 centuries, is expected to hold an inaugural Mass in the Sistine Chapel later today.

In his first public appearance on Wednesday before a huge crowd in St Peter's Square, Francis, 76, offered prayers for his predecessor, Benedict XVI, who last month became the first pope in centuries to retire, citing failing strength at the age of 85 after a papacy lasting almost eight years.

Cardinal Timothy Dolan said on Wednesday that Francis planned to visit Benedict at the papal summer retreat outside Rome, Castel Gandolfo, where the former pope - now pope emeritus - is living while an apartment is readied for him at a convent in Vatican City.

The two men – the 265th and 266th Popes of the Church - were also reported to have spoken by telephone.

The Rev Federico Lombardi, the Vatican spokesman, said today that Francis would not be visiting Benedict over the next two days, but still planned to do so at some point.

Francis is the first Pope to name himself after one of the most widely loved saints of the Church, who took a vow of poverty and was known for his sympathy with the dumb animals and birds of creation.

By all accounts he lives up to his name. The former archbishop of Buenos Aires is known as a warm, pastoral figure and a good communicator, who has kept out of the Vatican's power politics.

Father Ludovico Melo, a priest who prayed with him on Thursday, told Reuters, ''He spoke to us cordially, like a father. We were given 10 minutes' advance notice that the pope was coming [to the shrine].'' 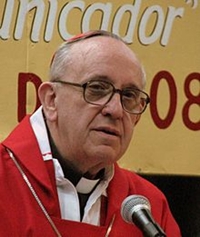 Cardinal Bernard F Law, who was at the centre of clerical sexual abuse scandal when he was archbishop of Boston a decade ago, sat nearby during the service at the basilica in his role as its emeritus archpriest.

Francis went to the basilica accompanied by Cardinal Camillo Ruini, his vicar as Bishop of Rome. Inside, he deposited flowers in the chapel of Salus Popoli Romani and prayed for about 10 minutes, Father Lombardi, the Vatican spokesman, said.

He then proceeded to the priests' residence where he was staying during the pre-conclave period, picked up his baggage and paid his bill in what some Vatican watchers took as a token of a new humility in the intrigue-ridden Vatican.