Lord Chris Patten, chancellor of the University of Oxford, has suggested Montek Singh Ahluwalia, deputy chairman of India's Planning Commission, as the next managing director of the International Monetary Fund (IMF). 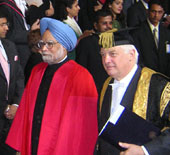 The chancellor's liking for Ahluwalia, however, is because he, like India's prime minister, is a product of Oxford. Lord Patten said his university was proud to have produced two leading economists who had steered India's economy in recent decades - Manmohan Singh and Montek Singh Ahluwalia.

Speaking at the launch of the Sanjaya Lall Visiting Professorship of Business and Development at the Said Business School on Friday, Lord Patten said he wished Ahluwalia to be the next IMF managing director. He, however, added he had "nothing against Christine Lagarde," the French finance minister currently in the running for the IMF top job.

Lord Patten's comments come at a time when emerging economies such as Brazil and Mexico are promoting their own candidates for the IMF job. India and China have also supported the idea of a non-European heading the multilateral funding body.

During his recent visit to Africa, prime minister Manmohan Singh himself had suggested that the next IMF managing director should be from the non-Western country.

Lord Patten recalled Oxford University's long ties with India and how several students from India have returned to their homeland to become nation-builders.