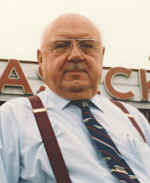 Frank Piasecki, inventor of the big twin-rotor helicopter, the Chinook and the Sea knight, died on 11 February 2008 after a brief illness. He was one of the last surviving American aviation pioneers from an earlier era.

In 1943, he became the second American to build and fly a helicopter, after Igor Sikorsky's first flight in 1941. He was born 24 October 1919, in Lansdowne, Delaware County, of Polish parentage.

At age 88, Piasecki was chief executive of his firm Piasecki Aircraft Corp.

Piasecki and his wife, Vivian, raised seven children. Daughter Nicole Piasecki is president of Boeing's operations in Japan. Two sons, Frederick and John, are vice presidents of his company and are carrying on his work.

Piasecki was an accomplished violinist and a gifted amateur photographer.

The US Army's Chinook as well as the US Navy's Sea Knight are now built by the Boeing Co's Rotorcraft Division.