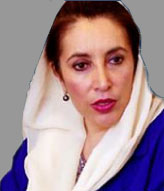 According to reports, paramilitary forces have been put on alert on the Indo-Pak border.

Emerging reports suggest that it was a combined and gun and suicide bomb attack that managed to successfully target Benazir, with the popular leader being declared dead by doctors at a Rawalpindi hospital at 6.16 pm.

Ms Bhutto was declared dead by doctors after they failed to revive her after a 35-minute struggle. According to reports, doctors said that she had shrapnel injuries. Initial reports also suggest that upwards of a dozen people have perished along with Benazir.

Eyewitness accounts at Liaqat Bagh, a park that is a popular venue for political rallies, in this garrison town, say that a suicide bomber first fired shots at Bhutto as she was leaving the venue, before blowing himself up. The nature and extent of her injuries vary according to reports, with some saying that she had gunshot injuries apart from shrapnel. Other reports suggest that she ducked when the assassin fired at her.

At a personal level, her death also brings the tortured history of a top political family from the Indian sub-continent, to a tragic end, almost matching the contours of a high-strung Greek drama.