Bose Corp, a leading player in the high-end audio products market, now has a new majority owner – the Massachusetts Institute of Technology (MIT). 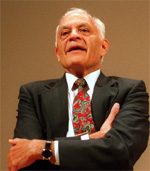 Dr Amar G Bose (81), who founded the privately held firm, is donating most of its stock to his alma mater. However, he will remain the company's chairman and technical director.

In a statement on Friday, the Cambridge-based school said it will receive annual cash dividends on the shares. The university said it will use the payments "to sustain and advance MIT's education and research mission".

There is however no clarity yet on the number of shares transferred; or what they are worth. Some observers have even suggested that it is a 'tax dodge' by Bose.

As a private company, Bose Corp does not disclose its finances, but estimates put its annual revenue at about $2 billion. Bose's personal wealth is estimated at $1 billion.

The MIT news release did not specify the number of shares awarded, other than disclosing they represented a majority of the company's stock. The statement also did not estimate the gift's value, or provide financial details.