About 2,006 shares advanced against 736 declining shares on the BSE.

3:16 pm Earnings: United Bank of India has posted a loss of Rs 637.5 crore for the December quarter 2017, dented by higher provisions with deterioration in asset quality performance.

Profit in corresponding quarter of last fiscal was at Rs 64.1 crore.

Net interest income during the quarter declined 3.6 percent to Rs 348 crore from Rs 361 crore in year-ago.

Gross non-performing assets for the quarter were higher at 20.1 percent from 18.8 percent in previous quarter and net NPAs were also higher at 11.96 percent compared to 11.63 percent in Q3FY17.

It is indicated for the topical treatment of mild to moderate atopic dermatitis in patients 3 months of age and older.

The 50-share NSE Nifty reclaimed 10,550 levels while the Nifty Midcap index was up 1.5 percent.

2:29 pm FIA seeks talks with Indian Exchanges: Washington-based Futures Industry Association (FIA) said it will seek discussion with Indian exchanges about their decision to stop trading of indices on Singapore and other foreign exchanges, even as SGX stock fell over 7 percent after the development.

Indian stock exchanges -- BSE, NSE and Metropolitan Stock Exchange of India (MSEI) -- on Friday said they will immediately stop the trading of indices of Indian securities on foreign bourses as part of a joint effort to stymie migration of liquidity to overseas markets.

Singapore Stock Exchange (SGX) however yesterday said its entire India suite of products, including Nifty, will open and operate per normal on Monday.

The bank had reported profit at Rs 373.5 crore in corresponding quarter of last fiscal.

Net interest income, the difference between interest earned and interest expended, grew by 30.2 percent to Rs 1,623 crore compared to year-ago.

Asset quality improved during the quarter as the gross non-performing assets were lower at 6.27 percent from 6.67 percent in previous quarter and net NPAs were also declined at 3.30 percent from 3.41 percent QoQ.

2:14 pm NBFC License: Eduvanz Financing Pvt Ltd said it has obtained licence from the Reserve Bank to operate as a non-banking financial company (NBFC) and has started providing loans in the skill development sector.

Eduvanz said it will utilise the funds for strengthening it artificial intelligence-based lending technology for loan appraisal and expand its operations-pan India.

"With the NBFC status approval from the Reserve Bank of India, Eduvanz is bringing much-needed financial support in the skill development ecosystem using analytical tools and advanced risk management capabilities to extend loans without any paperwork in a matter of minutes," the company said in a statement.

RInfra and ATL had signed definitive binding agreement for 100 percent stake sale of the integrated business of generation, transmission and distribution of power for Mumbai in December 2017.

Total consideration value is estimated at Rs. 18,800 crore. Transaction is expected to be completed by March 2018.

Oseltamivir Phosphate capsules are indicated for the treatment of acute,

"This will further expand Airtel TV app's wide range of offerings and expand the footprint for Hotstar's content across Airtel's large mobile customer base.

The IPO comprises issuance of fresh shares worth Rs 700 crore. Besides, existing shareholders will offer up to 2 crore scrips, as per the draft prospectus filed with Securities and Exchange Board of India (Sebi).

The company has recorded tax write-back of Rs 99.9 crore for the quarter against nil in year-ago. 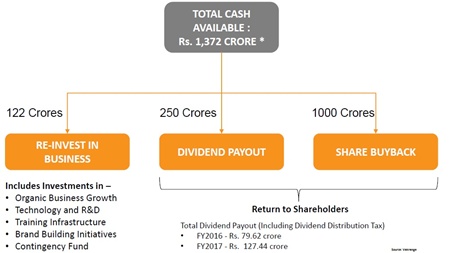 The broader markets continued to outperform frontline indices, with the Nifty Midcap index rising 1.5 percent. About four shares advanced for every share falling on the BSE.

All sectoral indices traded in the green except IT. Nifty IT index underperformed, falling 0.3 percent. HCL Technologies lost over 2 percent, followed by Infosys, Tech Mahindra and TCS.

Minimum alternate tax credit stood at Rs 11.1 crore and tax credit at Rs 15.4 crore in Q3 against nil in year-ago.

unveil his long-awaited infrastructure plan, a USD 1.5 trillion proposal that fulfills a number of campaign goals, but relies heavily on state and local governments to produce much of the funding.

The administration's plan is centered on using USD 200 billion in federal money to leverage local and state tax dollars to fix America's infrastructure, such as roads, highways, ports and airports.

"Every federal dollar should be leveraged by partnering with state and local governments and - where appropriate - tapping into private sector investment to permanently fix the infrastructure deficit," Trump said at last month's State of the Union address.

Trump has repeatedly blamed the "crumbling" state of the nation's roads and highways for preventing the American economy from reaching its full potential.

11:42 am Drug Launch in India: Sanofi India continued to deliver breakthrough medicines for the management of diabetes with the launch of its new product - Toujeo, the next generation basal insulin.

Toujeo is a once-daily, long-acting basal analog insulin that improves glycemic control in adults with type 1 and type 2 diabetes.

11:28 am Earnings Reaction: Shares of Tata Steel rose more than 5 percent intraday after the company reported a five-fold jump in its third quarter profit.

The consolidated income during October-December quarter increased to Rs 33,672.48 crore, from Rs 29,154.75 crore in the year-ago period.

The company bagged yet another exports order for supply of steel wheels for EU caravan market.

The order comprises of 19,500 steel wheels to be shipped from company's Chennai plant in the month of March 2018.

11:08 am Earnings Reaction: Shares of Marico today rose by more than 3 percent in morning trade after impressive financial results for the third quarter of 2017-18.

The company on February 9 reported a 16.51 percent increase in its consolidated net profit at Rs 223.28 crore for the quarter ended December 2017 on account of higher income led by market share gains.

The company had posted a net profit of Rs 191.64 crore during the October-December quarter of the previous fiscal.

Shares of the company today opened on a bullish note at Rs 303.55, then gained further ground to touch a high of Rs 307, up 3.02 percent over previous close.

The company has now inked a distribution agreement with Alter Ego LLC, Kieve, Ukraine which has more than a decade of presence in Ukraine, Russia and CIS region.

The company is expecting revenue upwards of USD 10 million for FY19 from CIS region.

10:55 am Market Outlook: The earnings growth is still some quarters away but 10 percent tax on the long-term capital gains (LTCG) should not impact investment decisions of investors, Dipen Sheth, Head-Institutional Research at HDFC Securities said in an interview with CNBC-TV18.

There is some noise about mutual funds declaring a dividend ahead of the financial year given the fact that dividends are tax-free now and after 1st April the long-term capital gains tax will come in.

However, Sheth said a 10 percent tax does not take away from any investment decision. A 10 percent vs 0 percent is nothing that bleeds my pocket. ''I don't see this as a technical ceiling,'' said Sheth.

Commenting on equity markets, Sheth said that equities were behaving like a debt and that has to give away. If we look back, for last 13-14 months, equities didn't show much volatility.

10:46 am Market Update: Benchmark indices continued to trade higher, with the Sensex rising 196.62 points or 0.58 percent at 34,202.38 as all the sectoral indices traded in the green, with the Nifty Pharma and Realty gaining 2 percent each.

About four shares advanced for every share falling on the BSE.

Net interest income during the quarter is seen falling 1.3 percent to Rs 2,826.6 crore compared to Rs 2,862.6 crore in year-ago, according to average of estimates of analysts polled by CNBC-TV18.

Analysts said if slippages in Q3 fall further (from Rs 2,141 crore in Q2FY18), net interest margin come above 2.1 percent (2.15 percent in Q2) and gross non-performing assets improve (from 12.62 percent in Q2) then that would be taken positively by the Street.

10:14 am Rupee Trade: The rupee recovered by 15 paise to 64.25 against the dollar in morning on fresh selling of the US currency by exporters and banks amid a higher opening in domestic equity markets.

On Friday, the rupee had dropped 14 paise against the  greenback to end at a near two-month low of 64.40 on bouts of dollar demand from importers and banks.

9:45 am Order Win: Shares of CG Power and Industrial Solutions added 4 percent in morning on order win by subsidiary company in Indonesia.

This project is the first of its kind to be funded by Islamic Development Bank to support PLN's ambitious goal to enhance its Transmission Grid performance.

The project will be completed by December 2018 and is going to play a critical role in its ongoing 35GW Fast Track Program.

CG Power will complete the supplies against the order by December 2018.

The scope of the work includes design, engineering, manufacture, erection and civil work, as well as testing and commissioning of the FGD system.

The overall schedule for the project is 20 months from the date of the letter and will of approval being delivered for the first unit, with three months additional time each for the two subsequent units, the company said in a statement today.

9:20 am Buzzing: Shares of Capacite Infraprojects gained 4 percent in the early trade on orders worth Rs 247.46 crore.

The orders include, Tower -2 of a project at Hindustan Mills, Prabhadevi, MMR for client Twenty Five South Realty, The Wadhwa Group, worth Rs 156.46 crore.

The Tower - 1 of this project in already under execution by the company.

About five shares advanced for every share falling on the BSE.

Nifty Midcap index was up over a percent.