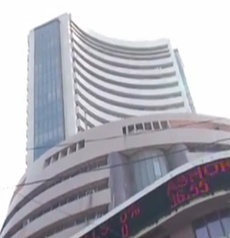 The rally in domestic equities was triggered by stronger-than-expected jobs data in the US, which indicated that the world's biggest economy is on the path of recovery.

Despite the strong US jobs data, many analysts are hoping that US Federal Reserve will delay its rate hike in the wake of Brexit. The European Union as well as other central banks are also expected to further loosen their monetary policy. This has triggered a global rally in risk assets like equities and commodities.

All stocks on the Nifty50 index were trading higher, led by gains in banking stocks. Private lender ICICI Bank and state-run Bank of Baroda and SBI were up between 2 per cent and 2.5 per cent, spurred by hopes of a rate cut following good progress of monsoon rains.

India's rural economy has been hit by back-to-back droughts, and normal monsoon rains are seen as key to boost consumption-led growth.

Rate-sensitive real estate and auto stocks also outperformed today. Analysts are hoping that Reserve Bank of India in its next policy meet in August will cut interest rates in the wake of the good progress of the monsoon.

Optimism that the goods and services tax or GST, considered the biggest tax reform since Independence, may be passed in parliament soon has also added to recent gains in domestic equities. According to estimates, the implementation of GST could boost India's GDP by 1-2 per cent.

Over the last few days, a number of global brokerages have turned "overweight" on India, citing improving domestic macro indicators and potential for stronger earnings growth. This has added to positive investor sentiment.

According to HSBC, India is one of the most convincing growth stories. The implementation of the Seventh Pay Commission's recommendations is seen to act as another catalyst for consumption in India, it added.

The relative outperformance in the rupee, despite huge volatility in global currency markets post Brexit, is seen as another positive factor for the rally in equities.