Govt may suspend trading in stocks to be divested

The Indian government is seeking to suspend trading in shares of public sector companies in which it plans to sell stakes to help raise some Rs69,200 crore ($11.2 billion) from its disinvestment programme in the financial year starting April. 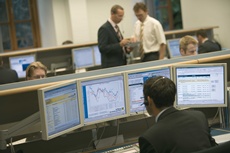 The finance ministry has proposed to the Securities & Exchange Board of India that it order a halt in trading of those companies on days the government puts up its stake for sale, disinvestment secretary Aradhana Johri told Bloomberg in an interview in New Delhi. A cap on fluctuations in share prices the day before has also been suggested, she said.

The government is seeking to stem losses from a plunge in stock prices as it targets to raise this amount in the fiscal year as it strives to narrow the budget deficit.

A 10-per cent offer in Coal India Ltd, virtually a monopoly miner, earned the government at least $3.6 billion even as the stock tumbled 8.6 per cent in the week that ended with the sale on 30 January.

''They should have a circuit breaker on a day before the trading if the share price suffers more than a percentage,'' Johri said. ''We have also suggested that they should stop trading in the secondary market on the day of the offer for sale.''

Steel Authority of India Ltd shares lost almost 7 per cent in the week ended 5 December, a day the government sold 5 per cent of its stake - the biggest weekly decline in SAIL since July 2014.

The government is looking to raise Rs28,500 crore through a strategic sale of its holdings in SUUTI, Bharat Aluminium Co and Hindustan Zinc Ltd, according to a federal budget document.

India's divestment receipts in the current fiscal year stood at Rs25,400 crore as of 30 January, Johri had said earlier.

In his budget speech on Saturday, finance minister Arun Jaitley announced that spending on roads, ports, bridges and other infrastructure would rise 25 per cent, largely funded by sale of stakes in state-run companies as well as the usual market loans.

''The disinvestment target for next year is certainly ambitious but we have got our game plan ready,'' said Johri. ''We have identified certain stocks. We already got a good pipeline and we will make it even better. We won't wait till the end of the fiscal year and we will be able to respond to the market.''

While disinvestment receipts have been pegged at Rs41,000 crore, strategic disinvestment is estimated to yield Rs 28,500 crore next fiscal, according to Jaitley's budget.

In 2014-15 the union government raised Rs24,500 crore from disinvestment in PSUs as against the Revised estimate of Rs 26,353 crore. It is unlikely to conduct any further stake sales this financial year.