Japan on Tuesday switched on a nuclear reactor, on the southern island of Kyushu, marking a cautious return to nuclear energy four years after the country shut all its nuclear power plants, following the catastrophic meltdowns at Fukushima in March 2011. 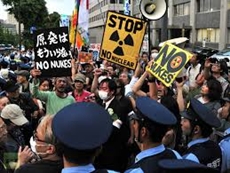 Kyushu Electric Power Co's Sendai reactor is the first to be restarted under strict new regulations governing safety at nuclear power plants in this earthquake-prone nation.

The restart of nuclear power generation was greeted with protests and shouting of slogans during an anti-nuclear rally in front of Prime Minister Shinzo Abe's official residence in Tokyo.

Workers at the Sendai plant pulled the control rods out of Reactor 1, at 10:30 am local time on Tuesday, triggering nuclear fission for the first time since the reactor was taken offline in May 2011, Kyodo news agency reported.

The reactor is expected to start generating power by Friday, and the plant's second reactor is set to be turned on in October.

The startup and restart of Sendai Nuclear Power Unit No1, and its continued operation will advance a key goal of Prime Minister Abe of generating cheap electricity after power costs in the country galloped.

''We hereby announce that as of today, Sendai Nuclear Power Unit No 1 (pressurised water reactor, 890 MW output), which is under the 21st periodic inspection, is expected to start up on August 11, and restart generating electricity on 14 August.

''After restarting generating electricity, we will conduct the adjustment operation as increasing output gradually. Accordingly, the plant is expected to undergo the verifying the overall plant performance and return to the normal operation at the beginning of September,'' Kyushu Electric Power stated in a release.

The company said it would sincerely continue to make an all-out efforts to deal with the nuclear regulation authority's inspections, and carry out carefully remaining process, putting utmost priority to safety.

Sendai Nuclear Power Unit No1, which started loading fuel assemblies from 7 July, has finished the work as of 10 August.

The company said it would continuously place the highest priority on safety and sincerely abide by inspections of the government as it resumed nuclear power production.

''We prioritise safety more than anything,'' Abe told reporters the day before the restart. ''Based on the harsh experience of Fukushima, we will not restart any plants unless they are approved as they meet the world's strictest standards.''

Japan idled all nuclear reactors across the country while it conducted safety checks and drew up strict new regulations after a devastating earthquake and tsunami caused a triple meltdown at the Fukushima Daiichi nuclear power plant on the east coast in March 2011.

This led to skyrocketing electricity prices and a surge in Japan's import of oil and gas, further straining public finances and family budgets.

Household electricity bills rose by a whopping 25 per cent in the four years to March, Kyodo reported, citing government data.

As Abe tries to kick-start Japan's economy, the prime minister has been promoting a return to nuclear power as a critical way to boost growth and help Japan become more efficient.

Tuesday's move paves the way for the other 42 workable reactors to come back online, although safety inspections and legal challenges may delay that process.

Only five reactors at three sites have been cleared for restart under the new rules, and a court blocked one of them.