Is it too late?

Prime Minister Dr Singh deserves the unstinting gratitude of the nation for having brought India far enough to make the eventual outcome of the delayed nuclear deal virtually certain, by having the courage to swallow every humilation without flinching from his resolve to see the deal through. By Prem Shankar Jha 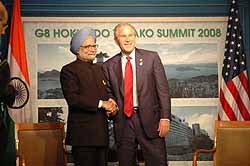 shame that had been gathering around the country ever since the UPA government began to show a willingness  to resile from an agreement that it and its predecessors had been working towards  for more than a decade. Once India has signed the safeguards agreement, it will have completed its obligations under the 2005 treaty with the US. The rest will be up to Washington.

Has India left it too late? Does the fading Bush administration have even the time it needs let alone the influence, to create the consensus required in the Nuclear Suppliers' Group? And even if it succeeds, will it then have the time to steer the 1-2-3- agreement through the US Congress in the very few legislative action days that will be left before the next election? Unsourced remarks by high US officials, reported by the Associated Press, suggest that it may not.

These doubts notwithstanding,  there may still be a sliver of a chance  to complete the deal during the life of the current administration. For one thing, Dr Singh's government has not been idle while Mr Pranab Mukherjee has fought his long drawn out battle to placate  the Left. It has discussed and virtually finalised the details of the safeguards agreement with the IAEA administration. Thus once a special board meeting is convened, the IAEA is likely to lose little time in accepting India's commitments. Both the US and the Indian governments have also been busy 'selling' the nuclear deal to the members of the Nuclear Suppliers' Group.

The great imponderable has always been China, and in a sense this has not changed, for the Chinese press release on President Hu Jintao's meeting with Dr Manmohan Singh in Hokkaido does not contain the explicit reference to nuclear cooperation that the Indian press statement does. But  its overall tone is so positive that it would not be unreasonable to expect China not to stand in the way.

However, even if the worst comes to the worst and all the above steps cannot be completed before the Bush administration ends its term, once India  signs the safeguards agreement the ball will be back in the next US administration's court. And there, despite the threatening noises that have been emanating from the Obama camp, India will find itself with a powerful new ally - Global Warming.

The Toyako G-8  summit saw an acceptance by the Bush administration that the threat from global warming is so serious and so near, that it can no longer afford  the luxury of  abstention from making a common, globally coordinated effort to first stabilise and then redue CO2 emissions drastically by 2050. But the Toyako summit also endorsed a long-held American position that global warming is a planetary issue and every country has to play its part in reducing CO2 emissons.