Airbus recorded lower orders for all categories of aircraft, with single-aisle planes recording a steep fall from 918 to 673.

The aerospace firm has faced serious delays to its flagship A380 plane that have delayed the project by over two years, which Airbus boss and joint CEO of parent firm EADS, Louis Gallois, described to shareholders as a major shock and disappointment.

The delay is expected to lead to an annual loss for the aircraft firm as the number of orders for A380s fell from 20 to 17; already the delays have cost Airbus more than $6 billion (Rs26,700 crore) and could rise further through settlements for late deliveries and cancellations. 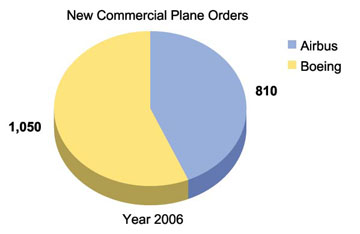 The A380 is widely regarded as being perhaps the most complex passenger jet ever built and Airbus engineers in Toulouse have been struggling to install the 500km of wiring that each plane requires.