Flush with dollars as oil prices reach record heights and remain there, Middle East economies are looking at newer ways to invest their money, and prime American real estate is their latest target. Latest news indicate that New York's iconic Chrysler building may soon change hands with the Abu Dhabi Investment Council, a fund based in the United Arab Emirates, looking to buy a 75-per cent stake for $800 million. 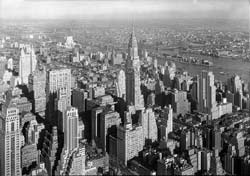 As for US citizens decrying this transference of an American icon into Arab hands, their anger may be somewhat muted if they realize that the aforementioned stake is owned by Prudential Real Estate Investors, a German investment firm. So, the building's ownership merely passes from one foreigner to another.

Real estate giant Tishman Speyer Properties owns the other 25 per cent of the midtown landmark, but it is trying to unload part of its interest to the Arab group. Tishman Speyer would continue to run the building with its distinctive crown, which shimmers in the Manhattan skyline.

As part of the Chrysler deal, sources said the Abu Dhabi Investment Council would also get part of the skyscraper's signature Trylons retail property next door.

Experts are of the opinion that the recent surge in interest in American real estate is merely a side effect of spiraling oil prices. "They have large sums of money and want to diversify their investments," Ron Cohen of real estate firm Cushman & Wakefield said. "They're looking for a place to park dollars."

Just last month, the GM Building and three other properties were sold for nearly $3.95 billion by Macklowe Properties to a group of investors, including the wealth funds of Kuwait and Qatar and Boston Properties.