Mining major Rio Tinto Plc has terminated its $19.5-billion planned deal with Chinese resources giant Chinalco, and the company has placed its shares under a trading halt today. (See: Chinalco invests $19.5 billion in Rio Tinto to raise stake to 18 per cent). 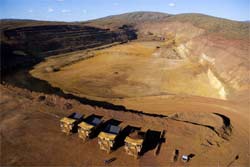 In a statement to the Australian Stock Exchange, Rio Tinto manager James Gerraty said the trading halt announced before the market opened on Friday would remain in place until 9 June, or pending the release of a final announcement by the company.

Rio Tinto also said it has decided to raise $15.2 billion through a rights issue to solve its debt problems.

It has agreed with rival BHP Billiton for a 50:50 joint venture to develop Western Australian iron ore mines. BHP has agreed to pay Rio US $5.8 billion for equity type interest. The miner said it expects to realise more than $10 billion in synergy benefits.

''Since we announced the Chinalco transaction in early February 20, financial markets have seen a significant improvement. This has had two consequence; firstly the financial transactions with Chinalco became markedly less valuable, and secondly our ability to raise a level of equity appropriate for our needs on attractive terms have improved very considerably,'' said Jan du Plessis, chairman of Rio.

''Given these new circumstances, and coupled with extensive feedbacks we have had from shareholders and others, the boards have concluded that the formation of an iron ore production joint venture in Western Australia with BHP Billiton, together with the rights issue deliver the best solution,'' Plessis added.