The Rajya Sabha on Wednesday passed the Motor Vehicles (Amendment) Bill, 2019, which once passed into law, would improve road safety, facilitate citizens in their dealings with transport departments, strengthen rural transport, public transport and last mile connectivity through automation, computerisation and online services.

Speaking on the occasion, minister of road transport and highways and MSME Nitin Gadkari reassured state governments that the bill would, in no way, encroach upon the powers and authorities of the states. Rather, he said, the bill would empower states.  Besides, he said, the bill will provide an efficient, safe and corruption free transport system in the country.
The bill has been passed with three government amendments and will need to go back to Lok Sabha. This, along with amendments, was passed by Lok Sabha on 10 April 2017. The Lok Sabha had already passed the bill on 23 July 2019.
The bill as passed by Lok Sabha was introduced in Rajya Sabha and was referred to the Select Committee of the Rajya Sabha on 8 August 2017. The Select Committee presented its report to the Parliament on 22 December 2017. The bill was pending in the Rajya Sabha and lapsed with the dissolution of the 16th Lok Sabha.
The Motor Vehicles (Amendment) Bill, 2019 is based on the recommendations of the Group of Transport Ministers (GoM) of states constituted by the ministry of road transport and highways to address the issue of road safety and to improve the facilitation of the citizens while dealing with transport departments.
The GoM was headed by Yoonus Khan, the then transport minister of Rajasthan, and had 18 state transport ministers from different political parties as members.
The amendments in the bill mainly focus on issues relating to improving road safety, citizens’ facilitation while dealing with the transport department, strengthening rural transport, last mile connectivity and public transport, automation and computerisation and enabling online services. Some of the important areas of amendment are as follows: 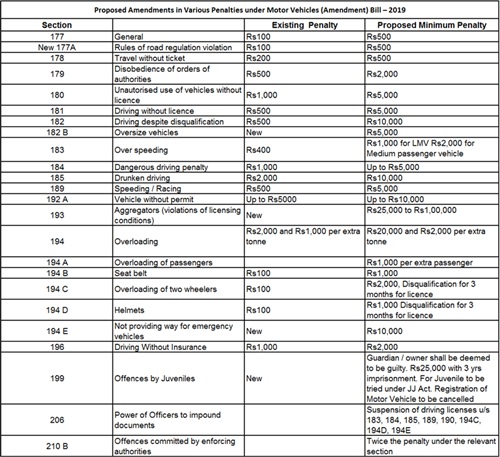