The biggest success of Make in India programme is in the auto sector, said union minister of heavy industries and public enterprises, Anant Geete, while addressing the press on the completion of four years of the NDA government. 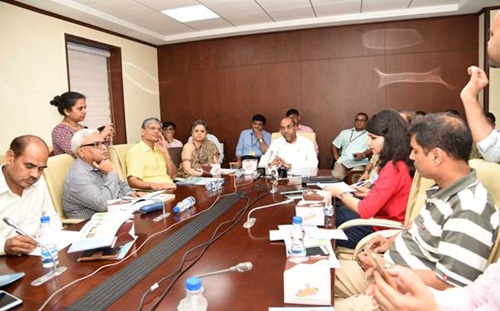 Geete said the auto mobile sector of India is one of the largest in the world and accounts for over 7.1 per cent of India’s GDP and contributes nearly 22 per cent of India’s manufacturing GDP. He also said, that the sector has become a manufacturing base for global car makers.
The minster also spoke about the faster adoption manufacturing of hybrid and electric vehicles in India (FAME), which was launched in 2015, and is proposed to be implemented over a period of six years till 2020.
Under the FAME India scheme, 22 original equipment manufacturers with 80 models are registered for availing demand incentive.  Till 31 March 2018, the government had provided financial support by way of demand incentives to about 1,86,431 electric / hybrid vehicles amounting to Rs256.93 crore.
The minister also said that the department of  heavy industries has sanctioned nearly 500 electric buses across nine major cities with an expected cash outgo of approx Rs280 crore. This will be a game changer in the public transport sector.
The minister also spoke about the capital goods policy launched in 2016 with the vision to increase the share of capital goods contribution from present 12  per cent to 20 per dent of total manufacturing activity by 2025.
The policy is aimed at increasing the production of capital goods from Rs230,000 crore in 2014-15 to Rs750,000 crore in 2025 and raising direct and indirect employment from the 8.4 million at present to 30 million.
The minister also spoke about the setting up of centres of excellence by the department of heavy industries in order to make the Indian capital goods sector globally competitive by addressing the issues of technological depth besides creating common industrial facility centres.
MORE REPORTS